An article on the Lear's Macaw in the Avicultural Magazine 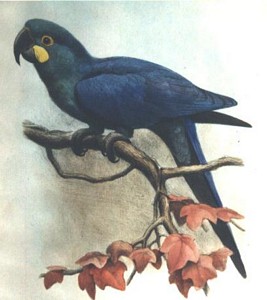 (Website editor: This article was accompanied by a pretty plate of a Lear's Macaw drawn from life by H.Goodchild)

Until I possessed a Lear's Macaw I must confess to not having appreciated the members of this family overmuch.

I have known individual Blue and Yellow Macaws and Red and Yellow ones too which were most untrustworthy and spiteful, I might say malicious to everyone but their owners, or almost everyone. And this spitefulness they show outwardly, with their flattened heads and wicked-looking eyes. They are splendid for colour, but personally I do not appreciate them as pets.

The Lear's Macaw on the other hand (and I believe the Hyacinthine is much the same) is naturally a bird with a kindly disposition. One is led to think so, if only from his outward appearance; his deep brown Cockatoo-like eyes and his large rounded soft looking head give one confidence to at any rate offer to scratch his poll, if he is a stranger to one. Comparisons are not fair I know, but I cannot appreciate the naked skin of the Red and Yellow Macaw's faces and also of the Blue and Yellow, after being more used to the Lear's Macaws with their faces well and respectably covered, and only enough bare skin of a splendid orange-yellow to enhance the peacock blue-green of the surrounding feathers. I think it is some colour very near that. Peacock blue-green upon the whole head and under-parts, the rest of the plumage being of a fine blue: of quite a different shade to that in the Blue and Yellow Macaw or the Hyacinthine either.

It is an extremely good blue, bright without being glaring. Then I like the black bill, with the tongue within so curiously coloured : black with a yellow stripe down each side of it, to carry on the yellow of the bare patches of skin at the corners of the mouth. These patches are of a lighter yellow than the skin around the eyes, which is more orange in tint. The feet and legs also are black (or what one calls black) and the toes are long and well shaped. Indeed. as my Italian servant said to about the Lear's Macaw I have in Italy, " è proprio un papagallo signorile, " -a real gentleman amongst parrots, an aristocrat.

The Lear's Macaws can make themselves heard, no doubt about that, but it is a voice of a much less strident ear-piercing tone than that of the vari-coloured large Macaws : it has more of the Carrion-Crow ` timbre' in it.

As to intelligence, I consider them most highly intelligent birds. One of mine, the one I know best, for I have not seen much of the other two, shows joy at seeing me and having a game of play, more keenly than any bird I have ever met with. He simply entreats me to take him off his perch, stretching out first one foot and then the other, and trying to feed me. He loves a game with a handkerchief. It is thrown right on to his head, covering it completely up, upon which he proceeds to dance up and down in great glee, and at last either dances it off, or else pulls it off with one claw, holding it, and then laughing loudly and in a most human way; waiting for the fun to be commenced all over again.

If he is put on a table, and I sit on a chair close by, he backs over the edge of the table with a foot waving round to find a foothold on my knees, and will return again and again however often he is displaced. He spreads his wings out from the shoulders with the ends of the wings kept in place, and whispers and "purrs," stretching out his neck and cocking his head on one side.

He can articulate too. " Cockatoo" he can say very plainly in a tiny voice, and "Ara," etc., and he can imitate cluckings and various sounds that go towards making up the vocabulary of one's bird talk.

As to his food; I need say nothing much about that, except that he likes sun-flower seed chiefly, with apple, banana or pear in the morning, and at five o'clock tea he always has some " Albert" or" Marie" biscuit, soaked in hot milk, and given not too moist.

It is a curious fact that none of the authorities in Europe seem to know from what part of South America the Lear's Macaw is bought. It is probably somewhere in Brazil, for they are brought from the ports of Bahia, Santos and Rio de Janeiro.

I have asked Herr Carl Hagenbeck, (Website editor: the famous German animal importer and proprietor of the Hamburg Zoo) who wrote to me:- I made enquiries about the Lear's Macaws, and I also cannot find the exact place from where the birds come. When we get these birds, they come from Bahia, Santos and Rio: to which places they are brought from the interior. This is all the information I can give about them."

So they probably inhabit some of the great forests fn the heart of Brazil, and a few young birds are reared from the nest, and carried to the ports on the coast.

If there is a Macaw like this who can be possessed; and yet whose habitat is unknown, how very possible that there may be a Macaw who has never been possessed and whose habitat is still more in the background! Let us hope so.