Depiction of a Hyacinthine Macaw

Georges Léopold Chrétien Frédéric Dagobert Cuvier (1769 - 1832) was a French naturalist and zoologist. Of working class origins, he belonged to a new class of self-made scholars who worked their way to the top of academia. Cuvier was a major figure in natural sciences research in the early 19th century and was instrumental in establishing the fields of comparative anatomy and palaeontology through his work in comparing living animals with fossils. He is well known for establishing extinction as a factor and was the most influential proponent of "catastrophism" in geology in the early 19th century. Catastrophism was the theory, which proposed that catastrophic natural events caused the extinction of species. He opposed the evolutionary theories of Lamarck and Geoffroy Saint-Hilaire.

Cuvier speculated that there had been a time when reptiles were the dominant fauna rather than mammals. In 1796 he produced a paper

on living and fossil elephants and in the same year in a second paper he described and analysed the fossil bones of a giant creature discovered in a cave in Patagonia naming it megatherium. He concluded that this skeleton represented yet another extinct animal and, by comparing its skull with living species of tree dwelling sloths, that it was a kind of ground dwelling giant sloth. In 1809 he identified and named the pterodactyl from a drawing of a fossil found in Bavaria.

There is a connection between the megatherium and the blue macaws in that Carlos Yamashita hypothesised in a paper published in 1997 that Anodorhynchus macaws were followers of extinct megafauna such as the megatherium or giant ground sloth.

The ornithological part of third or so-called Disciples edition was a collaborative production after the death of Curvier by his pupils, by then eminent zoologists, under the supervision of Alcide D'Orbigny. It was in two volumes with 94 fine hand-coloured plates drawn by Edouard Traviès and engraved by Guyard, Fournier, Oudet and others.

In my English language edition, published in 1854 by Wm. S. Orr & Co, Amen Corner, Paternoster Row, London, there is an engraving of four birds, one of which is of the Hyacinthine Macaw, here called Prince Maximilian's Macaw after the description by Spix published in 1824 in Avium

In 1819 this remarkable man was created a peer to honour his scientific contributions. Thereafter he was known as Baron Cuvier. He died in Paris in 1832 of cholera.

There follows the brief text accompanying Plate 55 on Page 228. The plate has drawings of the skull of a Scarlet Macaw (Aramacao) on either side of the engraving of the Hyacinthine Macaw. 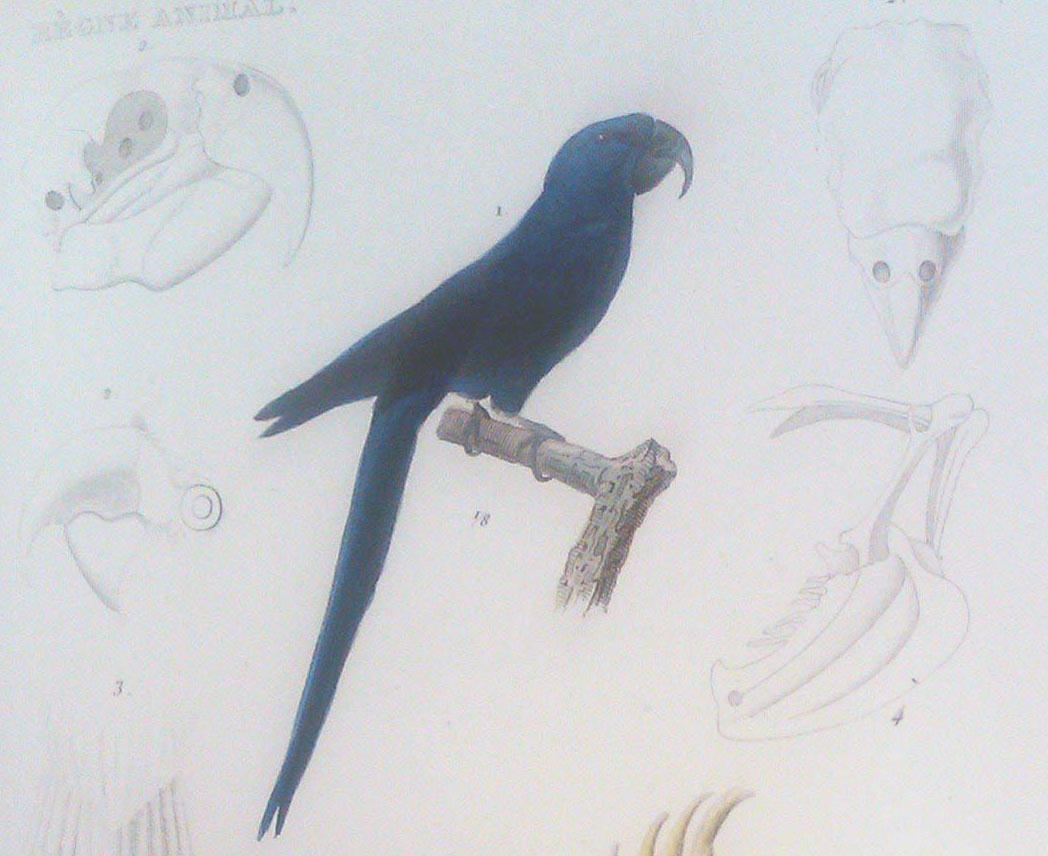