Entry on the Deep Blue Macaw or Anodorhyncus (sic) Maximiliani

in The Tower Menagerie by E.T. BENNETT. Published in 1829.

Animals and birds had been kept at the royal menagerie at the Tower of London since the third decade of the 13th Century when Emperor Frederick II presented Henry III with three big cats - either leopards or lions - on marrying Henry's sister Isabella.  In 1828 it was removed to a new location in Regent's Park, where it has remained under the auspices of the Zoological Society of London. In 1829 E.T.Bennett produced The Tower Menagerie comprising the Natural History of the Animals contained in that Establishment with Anecdotes of their Characters and History. On pages 215-6 appeared an entry entitled The Deep Blue Macaw headed and finished with two monochrome wood engravings of a macaw by William Harvey.

The entry was as follows:-

The second order of birds, which comprehends both the Picæ and the Passeres of Linnæus, is essentially distinguished from the rest of the class by the structures of the feet, which are formed for perching. That of the Scansorial (Website Ed: i.e climbing) tribe in particular, to which all the species to be here noticed belong, have two of the toes directed forward, and the remaining two directed backwards, in such a manner as to enable them to grasp the branch of a tree or other similar objects with peculiar firmness, and consequently to climb with more than usual agility.

This section comprehends some of the most gorgeously coloured and splendid among birds, as well as those, which evince the highest degree of intelligence, in the imitation especially of the human voice, for which they have been celebrated from the earliest times. 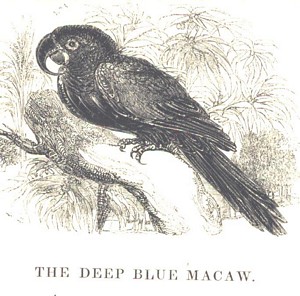 The beautiful bird, the portrait of which is prefixed to the present article, is one of the rarest of its tribe, and has until lately been confounded by ornithologists with the Hyacinthine Macaw, a fine, but much less splendid species. It is figured by M. Spix in his Brazilian Birds under the name which we have adopted; but is there given without either characters or description. Its claim to generic distinction would seem to depend on the excessive length and powerful curvature of its claws and upper mandible, and on the slight developement (sic) of the toothlike process of the latter. Its colour is throughout of a deep and brilliant blue; the beak, legs, and claws, are black; and the cere and a naked circle round each of the eyes are of a bright yellow. Our specimen measures two feet four inches from the top of the head to the extremity of the tail, and the expansion of the wings is four feet. The length of the upper mandible is five inches and that of the lower two.

(Website editor: The measurements of the macaw described above, with for example a total length of 71 cm, together with the bare cheeks of the macaw in the engraving, suggest it was most probably a Lear's Macaw, although they adopted the name Spix gave to his description of the Hyacinthine Macaw in honour of his patron, King Maximilian I of Bavaria. In any event, by the time the book was published in 1829, the macaw was no longer in the Tower menagerie. E.T. Bennett notes in his introduction written in November 1828 that "......(here follows a list of animals). ..and the deep blue macaw, have passed into foreign hands, and are now on the continent of Europe."