Excerpts from An account of travels in Brazil at the command of his Majesty, Maximilian Joseph I, King of Bavaria, in the years 1817 to 1820

This article has been researched and written by the website editor

In her article in issue 5/93 of "Gefiederte Welt " Maja Müller-Bierl quoted a few lines relating to Hyacinthine Macaws from the above work. This led me to look more closely at it.

On the website page devoted to Spix , there is an account of how he and Martius came to visit Brazil from 1817 to 20 at the command of the Bavarian King. They travelled more or less together from the end of 1817 to the end of 1819. In December 1819 they arrived at Ega (today known as Tefé) on the upper reaches of the Amazon river and decided to separate to complete two journeys. Spix was to travel the upper Solimões as far as the border with Peru and Martius the Yapura up to the Arara-Coara falls near the border with the vice-royalty of New Granada. Spix returned to Ega at the beginning of February 1820 having got as far as Tabatinga on the Peruvian border. As Martius had not yet returned from his Yapura journey, Spix decided to spend some time exploring the Rio Negro before travelling on to Barra de Rio Negro (now Manaus) at the end of February. Martius eventually arrived at Barra de Rio Negro on 11th March, 1820.

In the meantime both travellers were long overdue. In their last report they had planned to return to Belém by December 1819 and their failure to arrive there caused great concern in Munich. After spending four weeks travelling down the Amazon river, they finally arrived on 16th April 1820. Spix was very ill. After loading the collections and living animals on board the " Nova Amazonia " they set sail direct to Lisbon, where they arrived on 23rd August. They travelled through Spain and France reaching Munich on 10th December, 1820.

In the account of their travels Spix and Martius explained their objectives in detail. They started by listing their predecessors and their achievements - John Mawe, Wilhelm Ludwig von Eschwege, Maximilian Prince of Wied-Neuwied, Georg Ludwig-Freireiss and Friedrich Sellow and finally Auguste de St.Hilaire as well as Georg Heinrich Freiherr von Langsdorff. 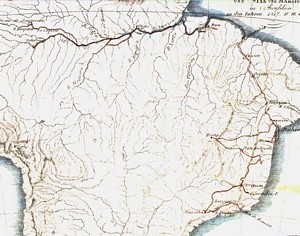 " With regard to these men as our predecessors and precursors as well as all written and verbal information, it seemed most expedient to journey first to the southern captaincy of S. Paulo, mainly to acclimatise ourselves gradually to the hot conditions we would encounter during our travels and acquaint ourselves with this more temperate southern zone. From the Captaincy of S. Paulo we planned to travel through the interior of Minas Gerais to the S. Francisco River and Goyaz, before continuing either down the Tocatins to Pará or across the interior to Bahia and the coast, where we would arrange transport of our collections to Europe before penetrating the interior of the Captaincies of Piauhy and Maranhâo to arrive finally at Pará, the goal of our desires."

Despite all the warnings and doubts of their Brazilian friends, Spix and Martius set out to realise their plan with enormous energy. They were issued with passes and letters of recommendation for the Captaincies of S. Paulo, Minas Gerais, Goias and Bahia by the Portuguese-Brazilian government. With a mule-man, a drover and a " newly bought negro slave " as well as six pack-mules and two for riding, Spix and Martius left for the interior of Brazil on 9th December, 1817. The first part of the journey for acclimatisation lasted until March 1818. At the end of March the second part started when they left Villa Rica to travel through the Captaincies of Minas Gerais and Bahia to Salvador.

In the fourth chapter of the second volume,which appeared in 1828, Martius described the journey through the sertão to Porto de Salgado (today known as Januaria) on the River S. Francisco. On page 528 he wrote:

" We stayed overnight on 12th August (1818)at the Fazenda Tamanduá, three leagues (approx. 15 km or 10 miles) northwest of Contendas. On the way there we were greeted once again by the magnificent forest of Buriti palms, which stretched for almost a league to the lower meadows. Numerous steel-blue macaws (the Ararauna, Ara hyacinthinus), the inhabitants of the lofty tree-tops, circled over us in pairs and their croaking calls echoed in the peaceful surroundings."

On 16th August Martius separated from Spix for a few days and travelled through the caatinga landscape near the Rio S. Francisco. He wrote in the first chapter to the sixth book (P. 564, Vol. 2):

" The higher drier regions were covered with thick, partly leafless shrubs, the lowland with a fine, flower-strewn grass carpet, out of which scattered groups of palms and fleshy bushes rose. The sertanejos call such meadows with bushes varredas. We found here (Serra de Salgado) a species of thorny fan-tail palm (Mauritia armata, M.) as the main decoration of the area as well as the scarcer noble wine palm (Mauritia vinifera, M.). The former provides neither the sugary sap nor edible fruits of the latter, but is very suitable for the construction of roof beams in the huts of the local people, who use the name of the wild Burití (B.bravo) to describe it. In addition there were dense stands of indajá palms (Attalea compta, Mart. Palm t.41.97.) here and there. These were the first palm forests, in whose shade we dared to roam around with dry feet and safe from giant snakes and alligators. The large nuts of these palms with their very fine rich oil make them the favourite trees of the large blue macaws (Ara hyacinthinus Lath.), which often flew off in pairs above us. As beautiful as this bird's plumage is, its hoarse penetrating call assaults even the most insensitive of ears and if it had been known in ancient times, would have been regarded an ominous bird of deepest foreboding. For us however the small menagerie of these quarrelsome birds, which we took with us chained to the roof of a few mule loading platforms, played a special role in that their continuous noise, which could be heard from afar, indicated the location of the caravan, which we usually left far behind in our forays to investigate the region."

On 5th. November 1818 the two scholars reached Salvador after an extremely arduous journey. They stayed there until mid-February 1819 to recover. Then they travelled through the sertão to São Luiz. The route went under conditions of extreme privation and appalling lack of water through often uninhabited areas. In May they traced a path to the southeast, then travelled to Joazeiro. Then they travelled to Cidade de Oeiras, capital of the captaincy of Piaui, alongside the Rio Canindé. On P.781 of his report Martius wrote:

" The catingas mostly consisted of sparse bushes and in the lowland areas, where there was much more water, the carnaüva palms formed stately forests, the sight of which was as strange as it was delightful. Blue macaws (Psittacus hyacinthinus, Lath), which live in the dense tops of these palms, flew up screeching above us "

(Website Ed: Could these have been Lear's Macaws? The location is just north of today's Lear's Macaw area and apparently they were still found north of the S. Francisco River some fifty years ago. As A. leari was first described by Prince Bonaparte nearly 40 years after Martius was in their area, we shall never know. The palm is probably Copernicia prunifera listed as carnaúba in Arvores brasileiras and has a small nut - 350 weigh 1 kilo)

Von Martius, born in 1794, lived until 1868 and was very highly regarded. Apart from the account of the journey in Brazil, he is famous for the work Historia naturalis palmarum, which he completed in 1850. This work published in single entries in imperial folio format eventually made up three volumes with a total of 550 pages with 135 plates, some lithographs and the rest engravings. Numerous illustrations were based on sketches made by Martius during his travels. Alexander von Humboldt praised the work with the following words: For as long as palms are named and known, the name of Martius will be famous.

As the blue macaws are specialist feeders of palm nuts and Martius seems to be the first to observe and comment on this, he has contributed to an understanding of this magnificent species. 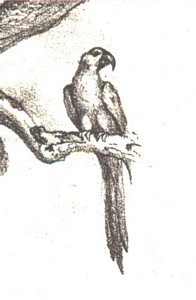 In the Atlas to the three volume work " Travels in Brazil " there is an illustration of South American birds and animals entitled in GermanTierformen des tropischen Amerika (Fauna of tropical America). It includes a macaw perching on branch described as Psittacus araraúna, which is clearly a blue macaw.