Sydenham Teak Edwards is believed to have been born in 1769, the son of a schoolmaster and organist living in Abergavenny, Wales. After making excellent copies of plates in Curtis's Flora Londinensis he was brought to the notice of William Curtis by a Mr. Denham. Curtis sent for him and had him instructed formally in drawing. From 1789 he produced nearly all the drawings for the Botanical Magazine and several for Flora Londinensis. He accompanied Curtis on expeditions and when the latter died in 1799 he continued to furnish the Botanical Magazine and issued six parts of the Cynographia Britannia with coloured engravings of various breeds of dog. He also supplied plates for New Botanic Garden, begun in 1805 and completed in 1807. In 1814 Edwards withdrew from the Botanical Magazine to start the Botanical Register. He died in London on 8th February 1819 aged 51 years. 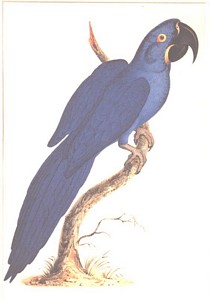 Sydenham Edwards completed a series of parrot illustrations between 1810 and 1812 including one of a Hyacinthine Macaw. These were acquired by Edward Smith Stanley, the 13th Earl of Derby, who in addition to collecting animals and birds, set about purchasing every natural history water colour or book of any note.

Stanley was born in 1775, the eldest son of the 12th Earl. He went to Trinity College, Cambridge, graduating as a M.A in 1795. He entered Parliament as one of the members for Preston in Lancashire, a seat traditionally held by members of his family. In 1812 he gave up his seat. He was not prominent in the Whig party he belonged to and spoke little in the House of Commons. In October 1834 he succeeded to the earldom and was made a Knight of the Garter in April 1839.

He showed a great interest in zoology when young. Between 1828 and 1833 he was President of the Linnæan Society and was President of the Zoological Society when he died in 1851. He contributed many papers to the latter's proceedings and many specimens to its collections.

He formed a very extensive menagerie at Knowsley, the seat of the earls of Derby just outside Liverpool, which cost him between £ 10,000 and £15,000 every year to maintain. It consisted of 100 acres (40 hectares) of land and 70 acres (28 hectares) of water. At his death there were 94 species and 345 head of mammalia, mainly antelope, as well as 318 species and 1,272 head of birds, excluding poultry.

The museum contained 20,000 specimens of quadrupeds, birds, eggs, reptiles and fishes. This collection was dispersed on his death. The museum collection went to Liverpool, and is now maintained as the Derby Museum. Some of the living animals went to the Zoological Society in Regent's Park, London and the remainder sold, fetching only £ 7,000.

Edward Lear was engaged by the Earl at Knowsley between 1832 and 1837, where he drew the fine plates to the Knowsley Menagerie, published in 1846 and also invented the Book of Nonsense for his patron's grandchildren, published in the same year.

Very reasonably priced facsimile plates from the 13th Earl of Derby's famous collection are available from Unicorn Fine Art Editions in Saffron Walden, Essex. Their contact numbers are Tel: + 44 (0)1799 516909 and fax + 44(0)1799 516993. The e-mail address is unicornart@dial.pipex.com

The 18th Earl opened a wildlife park at Knowsley in 1971, which has been continued by the present 19th Earl. Information is available from the park's website at http://www.knowsley.com