It was getting on towards midday on 5th January as we drove across the range belonging to the Fazenda Alegria deep within the Pantanal in southwest Brazil. We were a team of five under the leadership of Neiva Guedes consisting of Elly de Vries from Los Angeles, Kardu, a young Brazilian veterinarian student and Christopher Vaughan from the Latin American University in Costa Rica. Chris has a project going with the Scarlet Macaw (Ara macao) in Costa Rica and wanted to see the Projeto Arara Azul in operation. 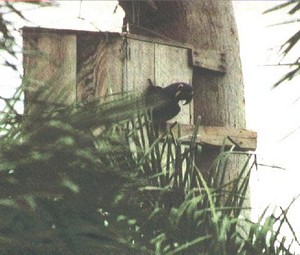 As we passed one of the typical islands of vegetation in the flat expanse of grassland, Neiva pointed to a large tree protruding above the canopy of the other trees and told us that she had put up one of the nest boxes built by a small group of German aviculturists in the previous June on the tree. The nest box came into sight through a gap in the and we all craned our necks to see it properly. Suddenly to our astonishment a Hyacinthine Macaw (Anodorhynchus hyacinthinus) looked out of the box. It had heard the engine of our Toyota and wanted to investigate.

Neiva quickly stopped the jeep and we jumped out to take hurried photographs. The macaw watched us for a few minutes, then left the box and flew away. Neiva decided to investigate further and we ran to the tree with the climbing gear, quickly set it up and Neiva skilfully made her way to the nestbox. She looked inside and held up two fingers. Two eggs!!. On the ground we danced silently around for a few moments with joy, then removed the climbing gear and departed as quietly and speedily as we could in order not to disturb the macaw too long in brooding her eggs.

This was truly a break through. We knew of only one other success with an artificial nest box on the Pousada Caiman the previous year. When the German aviculturists built the nestboxes we were doubtful they would be accepted and were considering changes to the design. We also had to find a more secure way to attach them to the trees, which was at the same time workable with just two people. Normally Neiva works with the assistance of a farm-hand, usually in his teens and therefore neither very skilled nor strong. The use of the nestbox so soon after being installed also clearly indicates the scarcity of suitable nesting sites for this magnificent macaw. Its preferred nesting tree - the Manduvi (Sterculia sp.) was one of the largest trees in the Pantanal growing to some15-20 metres (50 to 65 ft) after fifty to sixty years. It has a very soft core and is thus susceptible to the formation of hollows ideal for nesting purposes for the macaws. However it continues to rot forming completely hollow trees and branches, which then break off or topple in the high winds frequently gusting across the Pantanal.

During the three days I was there we visited 14 macaw nest sites. All the trees were damaged and we saw many fallen trees and branches. The local ranchers log sound trees for lumber, which also depletes the number of trees available. In addition the Hyacinthine Macaw has to compete for nesting sites with other wildlife including the Green-winged macaw (Ara chloroptera). Three of the fourteen nest sites visited were being used by Green-winged macaws. Although primarily targeted at the Hyacinthine Macaw, the Projeto Arara Azul also monitors the Green-winged Macaw and assists in its conservation in the western Pantanal, which is in the southern part of its distribution area.

The progress of the pair nesting in the nesting box will be closely monitored to see if there are any improvements necessary, either to the box or its location. If the pair successfully raise young, then an important solution will have been found for the lack of suitable nesting sites for the macaws, whether Hyacinthine or Green-winged. A second group of German aviculturists will be visiting the Pantanal with me at the end of May for some more hands-on conservation experience and the construction and installing of nest-boxes may become a priority. Hopefully we may also by then have solved the problem of attaching them securely to the trees.

Finally we were very pleased with the results of our visit to the nest sites. Of the 14 only three were empty. Another three were used by Green-winged macaws with two nests with two young each between 35 and 40 days old and the other with two eggs and a day-old chick. Apart from the nest-box the remaining nests had healthy young Hyacinthine Macaws varying in age between 30 and 100 days. One nest had two very vigorous young.

All the young were brought down from the nest and weighed and measured (total length, tail length, wing - closed and spread - flight feather lengths and tarsus). They had blood samples taken and were inspected for parasites. They also had their crop examined and measured as well as having the condition of eyes and ears noted.

The adult Hyacinthine Macaws made a great deal of noise and circled overhead, sometimes hovering to see what was happening to their young. The young birds remained largely quiet and extraordinarily trusting whilst they were being examined. On one occasion we visited first the nest of a Hyacinthine macaw pair and then that of a Green-winged pair some 50 metres ( 55 yards) apart.

Neiva is remarkable. One evening after taking us to observe a dormitory, where she saw over one hundred macaws gather to roost some three years ago, she drove across country in the dark for well over an hour to the research station where we were staying. Although very brief, the visit was very worthwhile. For me it was what all the work raising funds for the project was about. Real conservation in action!!

This year promises to be very busy as together with Elly de Vries we shall be raising funds for setting up a permanent and properly equipped base for the project. All the money we raise through the Hyacinthine Macaw Survival Fund goes to the project. Joe Cuddy and I pay our own travelling expenses and in addition we leave any protective clothing or equipment we buy for our own use in the Pantanal on permanent loan to the project personnel.