Progress with Spix's Macaw in the wild

Tony PITTMAN tells us what he saw on his recent visit to the Spix's Macaw project in Brazil. Published in "Just Parrots" (Issue August/September 1995).

It was near the end of a long hot day in the thornbush vegetation of the Caatinga in northeast Brazil. We had got up well before dawn to drive to the area where the last remaining wild Spix's Macaw (Cyanopsitta spixii) can be found.

Apart from visiting the project base camp we had driven around on the maze of dirt roads and tracks, trying to locate the macaw by talking to the local people in their little houses, in their fields or accompanying their goat herds. They were wearing the characteristic goatskin hat, cape, leggings and gloves as protection against the long vicious thorns everywhere. All were able to tell us when they had last seen the macaw and when it usually appeared in their vicinity, but we did not have a sighting.

Finally, late in the afternoon, we arrived at another farmstead and were about to depart once again disappointed when the farmer suddenly shouted that he had just heard the call of the macaw. We rushed around the back of the house and along a path down a slope to a little dried-out creek..

On the other side of the creek there stood a huge craibeira tree and near the top of this tree, on an outside branch, was perched the Spix's Macaw alongside a smaller parrot which we were able to identify as an Illiger's Macaw (Ara maracana). The macaw saw us and began to call out.

We were still several hundred metres from the tree and not close enough to photograph even with our best telephoto lens, so we advanced very slowly down the path, stopping every few metres to watch the two birds and check the distance. I used my camcorder to video the scene, whilst Thomas Arndt attempted to take photographs. Finally, when we were still some distance away, the Spix's Macaw flew off and disappeared very quickly behind the trees. As he flew out of sight he continued to give off his distinctive call. The encounter was brief and distant, but we had at last seen him.

We had arrived at Petrolina on 20th April from Brasilia, having been given the necessary official permission by the Brazilian wildlife authorities to visit this exciting pioneering project. We were picked up by Marcos Da-Ré, the dedicated Brazilian biologist, who is overseeing the project and whom I first met two years ago at a presentation on the planned project in Sao Paulo.

He drove us across the bridge connecting the two cities and then some 90 kilometres (55 miles) east beside the Rio São Francisco to the town of Curaçá which has some 10,000 inhabitants and serves as his administrative base for the project.

Macaw lives in the wild. The area is surprisingly restricted. Although the stunted thornbush vegetation, typical of the harsh arid caatinga, covers nearly one million square kilometres (650,000 sq. miles) in the Brazilian northeast, the specific combination of vegetation, necessary for the continued existence of the Macaw, amazingly seems only to occur in this one area, which measures approximately 70 km (45 miles) by 15 km (10 miles) along the banks of a large creek called the Arroio Grande.

This creek dries out completely for some of the year, but manages to supply enough water to sustain the craibeira tree (Tabebuia

caraiba), which can grow here as high as 20m (65 ft). It provides roosting and nesting opportunity for the macaws as well as one of its main sources of food. Apart from the fruit of the craibeira, Marcos told us the Macaw also feeds off favela, the fruit of the faveleira tree (Cnidoscolus phyllancanthus), the fruit of the pinhão(Jatropha molissima), the fruit of the baraúna (Schinopsis brasiliensis) as well as the occasional fruit of the freijo (Cordia sp.) at different times of the year. There are of course many other creeks off the Rio São Francisco, but none so far investigated has been found to have the range of trees essential to provide the macaw with year-round sustenance, shelter and breeding opportunity.

It is well known that the last recorded wild specimen, identified as a male from DNA analysis of discarded feathers, associates with the Illiger's Macaw, but it appears that this association is with different individuals depending on location. The Spix's Macaw range apparently extends over the ranges of several groups of Illiger's Macaws.

It is also fairly well known that the Spix's Macaw,Recovery Committee, made up of those aviculturists worldwide owning Spix's Macaws and representatives of the Brazilian authorities, agreed to reintroduce a wild-caught female, supplied by a Brazilian aviculturist, with the objective of eventually achieving successful breeding of the species in the wild.

A large aviary measuring 20m long by 5m wide by 7m high was constructed in the southeast of the wild male's area. This aviary has within it a fruiting specimen each of the baraúna and pinhão. It also has a smaller aviary at one end with service access. This smaller aviary was used to hold the female for two weeks to allow her to acclimatise, de-stress and enable blood samples to be taken. Her tail was clipped by 12 cm (nearly 5 in) so that she could be identified easily when released. She was held in the large aviary, growing accustomed to a natural diet for some eight months, before being released in mid-March of this year.

She was visited by the wild male whilst she was in the aviary and there was some vocal contact. We heard a taped recording of the male vocalising whilst we were there, which I managed to record on the video I made. Until mid-May there was no contact between the two macaws. The male appeared to fly from north to south along the creek and back again - a distance of some 35 km (22 miles), whilst the female was flying some l5 km (10 miles) back and forth along an east-west axis in the south of the area. But they have now made contact and have stayed together, so that the female can be regarded as properly returned to the wild.

Another young male was held in a small enclosure near the project building, which is several hundred metres from the large aviary. This male, which may have been taken from the wild as a fledgling some eight to nine years ago, belongs to the same Brazilian aviculturist. It is very tame and approachable, exhibiting typical captive behaviour such as swinging upside down from the mesh by one foot. It has been given natural fruits, which it now eats with great relish.

However it was obvious to us there was some form of bonding between the released female and the young male, either possibly as

parent/offspring or actually as a pair. The female regularly returned to the site and perched on top of the male's enclosure. He then climbed up to be close to her. When she flew off there was vocalising betwen the two macaws. However, since making contact with the wild male, the released female has not returned to the project base.

The project is very much in the early stages. The objective of pairing the wild male with the released female has only just been achieved. The breeding season starts in September and the co-ordinators are hoping the pair may start breeding then. The young male has now been located in the large aviary. This had been delayed to avoid exposing the female to possible attack by the Great-horned Owl (Bubo virginialis) during the night if she should try to roost on the top of the aviary. It is now hoped eventually to get agreement to bring another female to the site for pairing with the young male and achieve controlled captive breeding within the large aviary.

Future hopes for the Spix's Macaw 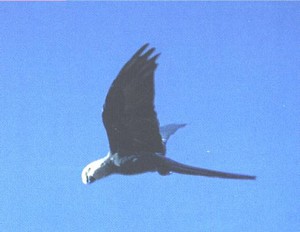 It was a great privilege to be granted permission to visit the project and an enormous thrill to sight the wild male, even if only briefly, as well as observe thefemale flying free with the peculiar swooping flight and shallow wingbeats.

We should like to thank Marcos Da Re and his small team for their hospitality. They obviously enjoy a really good rapport with the local people, who report regularly on the movements of both the wild male and the released female.

Wherever we travelled within the area there were smiling people with information on the whereabouts of the macaws. Marcos has done an excellent job of educating the local people both in the town of Curaçá and surrounding countryside. Their support and assistance will be essential for the success of the project and the continued existence in the wild of the Spix's Macaw.

(Website editor comment: We returned at the end of April to Europe somewhat euphoric as the tone of this article, which was written soon after, suggests. Whilst there, however, we had expressed reservations about the shortening of the female's tail as we were concerned it could affect her manoeuverability.

In the event the wild male re-established his partnership with the female Illiger's Macaw, which continues to date. The released female was reported missing towards the end of the year and has not been seen since. I suspect she was either taken by a raptor or recaptured by a trapper.

With hindsight perhaps drastic measures should have been taken to separate the wild male from the Illiger's Macaw and capture him so that the large aviary could be used for in situ captive breeding.