Various reports on the Glaucous Macaw

in the Proceedings of the Scientific Meetings of the Zoological Society of London.

Purchased for the menagerie in June 1860.

1 Blue Macaw (Ara glauca) .......stated to have been exhibited for the first time.

Mr. Sclater exhibited a skin of Ara glauca (Vieill.) from Corrientes belonging to M. Boucard's collection, and stated that, after comparing it with the bird in the Society's Garden purchased in June 1860, and named in the "List of vertebrates" (1877, p.240) Ara glauca, he had come to the conclusion that the latter bird was certainly not an example of Ara glauca, but belonged to the allied form "Ara leari", readily distinguishable by its larger size and intense blue colouring, almost as fine a blue as A. hyacinthina. 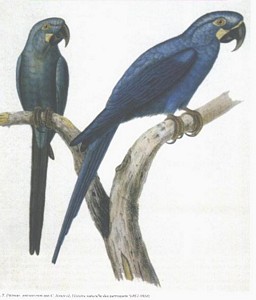 The two species were well represented and distinguished in >Souancé's 'Perroquets', Pl. 1.

There were, therefore, four species of wholly blue Aras, namely:-

Of all these, except A.glauca, the Society's collection now contains living examples.

Mr Sclater's remarks on visiting the Gardens at Antwerp.

The Gardens at Antwerp were in their usual excellent condition and very fully stocked. ........Among other noticeable objects were .......several specimens of Ara glauca, one of which had been obtained for the Society's collection.

The Secretary read the following reports on the additions made to the Society's Menagerie during the months of June, July, August, September and October, 1886:-

The following are of special interest:-
1. A Glaucous macaw (Ara glauca) purchased of the Zoological Gardens, Antwerp, June 3rd. Of this near ally of Lear's macaw we have not previously possessed a living specimen. The present species is of nearly the same size and general coloration as A.leari, but it is at once distinguishable by the glaucous blue of the body.

Among the additions may be specially noticed two rare American parrots - a Lear's Macaw (Ara leari) and a Lineolated Parrakeet (Bolborhynchus lineolatus) acquired by purchase.

Mr. F.E. Blaauw on the Zoological Gardens of Berlin.

Among the Parrots exhibited I saw ......ten species of Macaws, with Ara hyacinthina, A. leari, A.glauca, A.spixi, and the rare A. ambigua in the number.