A report in Issue 52 (March 1999) of Cyanopsitta, the newsletter of the Loro Parque Foundation.

(Website editor: The Loro Parque Foundation has been the main sponsor of the Spix's Macaw Recovery Project since it was set up in the early 90s. The report below indicates that this long-term investment is starting to produce real results.)

Over the past months, we have seen a number of exciting new events in the Spix's Macaw recovery project, of which the Loro Parque Fundación has for many years been the principal supporter. The results not only provide us with invaluable insights into possible future strategies, they even open up entirely new avenues aimed at re-establishing a viable population of Spix s macaws in their natural habitat, the caatinga of North-Eastern Brazil. 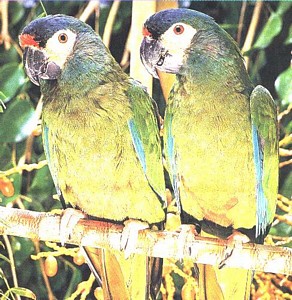 Between December and January the long-awaited release of a group of captive-bredIlliger's macaws finally took place. The release of these birds, made available by Loro Parque Fundación, into the project area, is intended to simulate the future release of Spix's macaws from captivity.

One of the requirements for the release had been the selection of a radio-tag to be attached to the parrots. The radio collars that had previously been deployed on the birds in the pre-release aviary in Spring of 1998 were destroyed by the parrots and had also severely affected the behaviour of the birds. To address this situation, in September 1998 we conducted an experiment at Loro Parque, with a new type of transmitter mounted on the tail undersides.

After a pair of students had been observing the birds for a few weeks, the experiment was considered sufficiently successful to justify the use of this tag type on the birds in Brazil. ln consequence, the CPRAA (Permanent Committee for the Recovery of the Spix's Macaw) decided in favour of the release.

In the presence of our Scientific Director, who had brought with him ten of the new radio tags, and together with the field coordinator of the project, Yara de Melo Barros, and the Brazilian biologists and CPRAA members Luis Sanfilippo and Carlos Yamashita, the first group of five birds was released during the first week of December. The remaining four birds were freed from the pre-release aviary six weeks later in January. In addition to the radio-tags, the birds had also received a specially designed collar made of dental wire, with coloured metal balls to allow individual identification by sight.

Within one month after the release, one bird had disappeared without a trace, and a second was lost to a predator, confirmed when the remains were found by following the transmitter signal. Of the remaining seven parrots, only four now maintain their radio tags attached to their tails - the others were shed together with the central tail feathers.

The parrots spent entire days around the flight aviary, in which they had lived for more than one and a half years, then they increasingly started to leave it for larger exploratory flights, and stayed in distant trees overnight. At around the same time, particularly in March, the birds were encountered feeding on natural food items more frequently, whereas before they had depended mainly on the food provided by the field team.

Now approaching its fourth month, the wealth of information gained underlines the enormous value of this experiment.

In the fourth attempt in the third year, the replacement of clutches of the hybrid pair with those from nests of wild Illiger's macaws eventually proved successful. Whereas in the first three experiments, the eggs of the hybrid pair had been replaced with fertile eggs of equal age, in this latest attempt, the eggs were exchanged with wooden eggs, that towards the end of January were replaced with two three-day old chicks taken from a nearby Illiger's macaws nest. The new foster parents, after a brief period of surprise, immediately started to feed the young. In the third week of March, the two chicks fledged, after which both parents continued to feed the young outside the nest.

The experiment provides evidence for the first time that the hybrid pair is capable of fostering young, and hence opens up entirely new horizons for the recovery of the species. Every attention must now be paid to provide in the near future young captive-bred Spix's macaws to the pair, to use the inestimable experience of the wild male in the reestablishment of a new population of Spix's macaws.

We would like to congratulate the field team led by Yara de Melo Barros for these very promising results.