The Black Macaw of the Brazilians Anodorhynchus hyacinthinus

The Hyacinthine Macaw is the largest parrot in the world measuring more than 90 cm in length. His plumage is often described as cobalt-blue, being darkest on the wings and tail feathers. The bright yellow of the bare skin areas around the eye and bill contrasts sharply with the plumage colour. In its homeland Brazil it is still known as " Aara preta ". This local name is a literal translation of the older Tupi Indian name of " arara una". Arara refers to the sound made by the macaw. The Tupi world " una " means dark, black as in the Portuguese word " preta ". This was mentioned several times in the last few centuries.

Taxonomic names, however, are based on other criteria. Linné used the famous work on the birds of Brazil by Marcgraf published in 1648 for his ""Systema naturae" of 1758. In this the Blue and Yellow Macaw (Ara ararauna L.) is illustrated and described as "Ararauna". Marcgraf, who spent seven years in Brazil investigating the birdlife there, was unable to complete this work himself and left notes about Brazilian birds. To prevent these being misused by others he wrote them in a coded script. De Laet painstakingly decoded and edited the notes so that the work could be printed. Since then the Blue and Yellow Macaw is called " ararauna " in Europe and elsewhere in the world where European thought predominates. In his "History of Ornithology " Erwin Stresemann wrote "For more than 150 years Marcgraf was the only information source on Brazilian animals after the Portuguese rebelled against the Dutch occupation in 1648 and re-conquered Pernambuco, their last stronghold in Brazil in 1653. Thereafter all news about the country was suppressed until the beginning of the 19th Century when the ban was lifted. Ray, Brisson and Buffon used Marcgraf's data in their works, whilst Linnaeus and Gmelin based no fewer than 45 species names on his descriptions....."

In Brazil on the other hand the Tupi language of the indigenous population had a lasting influence on Portuguese. Many Brazilian words, especially those for animals and plants, are Tupi - just one of the many Indian languages - in origin. Tupi was the main language spoken along the Atlantic coast at the time of the arrival of the Portuguese. It was developed as a lingua franca by the Jesuits and was used generally by everyone, including Europeans, for trade and travel. It is still used as such in some parts of the Amazon basin, even if often in altered form.

Apart from the Hyacinthine Macaw another member of the Anodorhynchus group was known in old literature - the Glaucous Macaw (Anodorhynchus glaucus Vieill., l8l6). It is presumed that it has become extinct in the meantime. Its origin was in Paraguay. In Guarani it was called " guaa obi ", with " guaa " again representing the sound of the macaw and " obi " meaning blue or green. The third member of the group called the black macaw by the local people in recent times is the rare Lear's Macaw (Anodorhynchus leari Bonap., 1856 ). Its home in northeastern Bahia was first discovered by Helmut Sick at the end of 1978.

Martius encountered Hyacinthine Macaws (Anodorhynchus hyacinthinus) frequently during his travels in Brazil at the beginning of the 19th Century. He describes, for example, a magnificent stand of buriti palms stretching for a league (about 6 km) to low meadows. He writes "I>numerous steel-blue araras (the arara-una), the inhabitants of the lofty treetops, circled over us in pairs and their croaking calls echoed in the peaceful surroundings". Martius considered that "As beautiful as this bird's plumage is, its hoarse, penetrating call assaults even the most insensitive of ears and if it had been known in ancient times, would have been regarded as an ominous bird of deepest foreboding."

In a Juruna Indian legend about fountains of youth in heaven a man, who was unworthy, attempted to bathe in a fountain, but found himself in dirty, dark water, which transformed him into an " ararauna ". He flew out of the water as a black macaw and was cursed. When a second Juruna used the ladder to heaven, which led to a fountain, despite having transgressed it broke and was never lowered again. In both cases the sin was of a sexual nature regarded as human weakness.

The Hyacinthine Macaw did not feature as a pet in Indian settlements as much as the scarlet or the blue and yellow macaw, whose plumage was generally more desirable and used for cult head-dresses. However, wherever they were kept as pets they could be handled even by small children. Knottnerus-Meyer, the Director of the Rome Zoo remarked about specimens, which he saw on perches at Hagenbeck's zoo in Hamburg in 1910,"the huge Hyacinthine araras, whose powerful bills appeared so frightening, were all hand tame as they mostly are." Sadly this magnificent parrot species has become endangered in the wild in the meantime so that in zoos they often have to protected from human visitors with, for example, a glass screen.

Hyacinthine macaws were probably brought to Europe soon after the discovery of the Americas. Emperor Rudolf II (1552-1612) probably had the most important animal collection of his time and these zoological treasures were captured on canvas by the court artists, Hoefnagel, senior and junior (Website editor: See note at conclusion after the references). Ertwin Stresemann recognised an Anodorhynchus, probably a Hyacinthine Macaw among them. He wrote "Most of these rare birds came to Austria via Holland." The Dutch had landed on the coast of Guayana in 1580 and some Indian tribes had a well developed trading network.

In fact Hyacinthine macaws occurred in the vast landscape of Guayana, which comprised northeastern South America between the Atlantic Ocean, the Amazon and the Orinoco, extending into Brazilian territory. Goeldi discovered Hyacinthine Macaws in large numbers during his expedition of 1895 into the southern littoral of southern Guyana between Oyapock and the Amazon river. He relates how he found them breeding , "the fresh Canarána meadows lay just before us with a majestic forest of enormous slender Miritý palms behind, in which blue Hyacinthine Macaws were landing all the time."

The best known distribution areas of the Hyacinthine Macaws, frequently visited by field-workers, are in the Mato Grosso and in Goiás, West Minas, Bahia, Piaui, Maranhâo to southern Pará. Helmut Sick referred to the Hyacinthine macaw as a typical inhabitant of palm savannah. They can crack open very hard palm nuts. Their preferred food is, according to Sick, unripe, soft nuts, small seeds as well as the sproutlings of certain palms. In addition they feed on many fruits, including figs.

The pictures here (Ed: not on the website) were taken in the Pantanal in Mato Grosso. The Pantanal is a lowland plain with extensive wet savannah, flooded during the wet season. Forest islands and gallery forest occur on higher ground, the latter on river banks and raised areas along the so-called lakes. It is partially green wetland forest with tecoma species, jacaranda, caryocar and vochysia often over grown with strangler figs. The Hyacinthine Macaws nest in the trunks of dead palm trees, but also hollows of large trees, sometimes in holes in cliffs.

Sick, who often observed Hyacinthine macaws on expeditions said, "the mighty bill of an adult Hyacinthine Macaw appears to be out of proportion to the head. From afar and in bad light conditions its plumage looks black so that the local name of this bird " black macaw or Arara preta, Arara una " is well justified." Sick found that this bird has hardly any enemies apart from man.(Ed: the Harpy Eagle (Harpia harpyja) is known to predate Hyacinthine Macaws). Hyacinthine Macaws in the wild are mostly described as very shy. When shot at and during the breeding season they will attack people approaching and can cause considerable wounds.(Ed: this is completely contrary to my own experience and that of field-workers such as Neiva Guedes). They have been traditionally hunted by Indians and by locals in poor regions for meat. Trapping for trade has become a serious problem only recently as the price internationally for these birds rose and considerable profits could be achieved through trading in them. 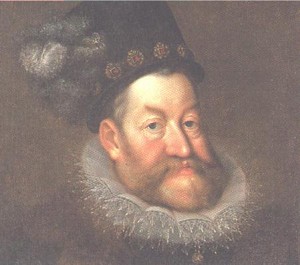 (Website editor: I was intrigued by this reference to a blue macaw being depicted by Hoefnagel as it would be the very first illustration and decided to try to trace it. Eventually with the enthusiastic assistance of Walter Gesell, my colleague in Vienna, and Veronika Sandbichler at the Art History Museum in Ambras Castle near Innsbruck, I found the work in question. Although the author of this article refers to it as " being caught on canvas", it was in fact not a painting, but a codex or illuminated book entitled Naturstudium or Bestiary of Emperor Rudolf II. This fabulous work, which is in the Austrian National Library in Vienna, includes a number of parrots including two illustrations of a Blue and Yellow Macaw (Ara ararauna) entitled "Blue Macaw").

Having read the original reference by Erwin Stresemann in his work Die Entwicklung der Ornithologie published in 1951, it is clear that he had not seen the illustration himself, but was merely reporting the discovery of illustrations of a blue macaw, which he queried asA.hyacinthina. On page 28 of the English language version of his work Die Entwicklung der Ornithologie the text reads as follows:- " But far outshining all such co1lections were the animals belonging to the Emperor Rudolf II (1552-1612). Clusius reported in 1605: "I hear that his Majesty spares no expense to indulge himself in these trophies of travel, and in the knowledge of all the wonders of Nature." Instead of concerning himself with the business of government in times of crisis, this monarch withdrew to study art and science, to the detriment of his subjects. In 1587 he built Schloss Neugebau near Vienna, with a menagerie and a natural history collection which he added to at great expense. It seems that this eccentric recluse allowed no specialist a chance to see his treasures, which could have vanished without trace if he had not commissioned his Dutch court painters, Georg Hoefnagel (1542-1600) and his son Jacob (1575-1630), to portray in oils the zoological prizes from Schloss Ebersdorf and Schloss Neugebau. These pictures, most. of them admirable, including 90 of birds, are still in the Viennese Hofbibliothek. The earliest (Crax) is dated 1571, though most seem to have been painted between 1602 and 1610. Only when they were rediscovered by Georg von Frauenfeld in 1868 did anyone realize that the emperor had a dodo in his menagerie, in addition to ths first cassowary brought to Europe, a great curassow (Crax rubra?), a blue macaw (Ara hyacinthina?), an Ara ararauna, a sulphur-crested and a rose-crested cockatoo (Cacatua galerita and C. moluccensis) a lory from the Moluccas (Lorius garruluis), two lovebirds (Agapornis pullaria) from the coast of Guinea and many other treasures not known anywhere else at that time."