The inauguration of the new base for the Projeto Arara Azul

Last October as long-standing sponsors of the Projeto Arara Azul, the Hyacinthine Macaw Project operated and managed by Neiva Guedes, Joe Cuddy and I received a formal invitation from the rector of UNIDERP, the University for the Development of the State (Mato Grosso do Sul) and the Pantanal Region, which has been the project's patron since being founded at the end of 1996, to attend the official inauguration of the new permanent base for the project on the Caiman estate near Miranda on November 8th.

Unfortunately I was unable to travel to Brazil at that time as I was scheduled to be in Germany on business at a major international trade fair and also to give a presentation on the blue macaws the following day to a large gathering of German aviculturists, veterinarians and zoo personnel at a symposium in Bielefeld in the Ruhr sponsored by the German parrot conservation organisation " Fonds für bedrohte Papageien". Joe was also working and likewise could not travel to Brazil.

However, the inauguration of the new base was well attended by local dignitaries, politicians and journalists from Campo Grande, the state capital, and São Paulo. Roberto Klabin, the well-known Brazilian industrialist, who owns the Caiman estate, was also there and was welcomed as the second patron to the project.

Neiva Guedes has been working in the Pantanal studying and conserving the Hyacinthine Macaw population there since 1991. During the early years she stayed at ranches, lodges and the government research station whilst conducting her studies, but by 1995 it was clear that as the scope of the conservation and research work increased, she needed a permanent base. Neiva investigated a number of options later that year and the best seemed to be the conversion of an old school-house on the Alegria ranch, which was being used at that time to accommodate the processing operation of locally-collected honey and which I saw in January 1996.

The work, which cost some $ 15,000 was almost complete, when the rancher's wife arrived hotfoot from Rio de Janeiro, where she lived, to investigate this strange woman on her husband's ranch and decided she wanted the restored building for herself. The rancher refunded the monies spent and a much disappointed and by this time considerably stressed Neiva started looking again.

Fortunately Roberto Klabin kindly offered the possibility of accommodation in 1997 and finally after lengthy negotiation, Neiva started moving there in July 1998. The next few months were spent getting the building ready for its inauguration. I finally visited it at the beginning of January 1999 and was much impressed by the facilities there, its central location in the southern Pantanal and the tremendous possibilities it provided for expanding the scope of the project activities.

The building, which is situated on the edge of the ranch workers' village, is large with 3 bedrooms, a large kitchen, lounge area and several bathrooms. It also has a large room with two stainless steel sinks, which will be equipped to be used as a laboratory/scientific work area, as well as a store room. Most important of all it has a 24 hour power supply, clean, potable tapped water and proper sanitary arrangements. The nearby ranch office also offers telephone and fax links to the outside world.

An adjoining building will be used as a visitor information centre for interested guests at the Pousada Caiman hotel, but it will not be accessible to casual tourists and indeed there are two separate control points on the 36km (22.5 miles) dirt road to the estate entrance from Miranda, the nearest town, to deter unauthorised visitors to the hotel, which offers luxury accommodation and a varied activity programme to both Brazilian and foreign visitors.

Neiva now has a full time assistant and hopes to recruit another. More than 200 natural nest hollows are being regularly monitored and 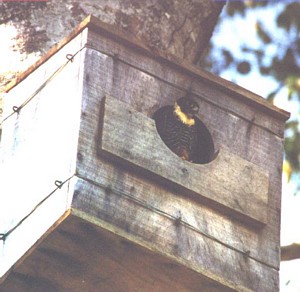 in the last two years more than 120 nest boxes have been installed and are being used by a wide range of species as well as macaws. During my recent visit I saw some with brooding Collared Forest Falcon(Micrastur semitorquatus)and Bat Falcon (Falco rufigularis)females. This has taken some of the competitive pressure off the Hyacinthine Macaw pairs, who tend to prefer natural nest holes.

The new base offers the opportunity to reconsider and restructure aspects of the project's work and enable it to expand operations into other areas of the southern Pantanal as well as intensify it in areas already covered. Apart from her work in the field Neiva has invested considerable time and effort in educating people throughout the state by school visits, radio broadcasts and newspaper/ magazine articles. This increased awareness together with the continued support of the two local patrons, UNIDERP and Roberto Klabin, will no doubt benefit all wildlife in the area.