A family of Spix's Macaw 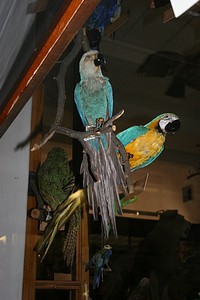 The swallows arrived back earlier this month and are nesting again in the eaves of the stable building. The young male Spix's Macaw transferred to Loro Parque from Germany in March is settling down well with the young female bred there. Also earlier this month I visited the mission museum at Steyl in the Netherlands after learning that there is a Spix's Macaw captured in the early 1930s on display there. I went there with Axel Hirschfeld from the Komitee gegen Vogelmord. The deputy curator kindly took measurements and I took some photos although the light was not very good to protect the extensive taxidermy collection there of animals and birds sent during the early years of the 20th century from all the mission houses throughout the world.

Some fourteen years ago Joe Cuddy and I visited Nelson Kawall in Sao Paulo and saw a magnificent macaw there, which Nelson said was a very rare naturally occurring mutation of the Blue and Yellow Macaw (Ara ararauna).  Nelson and other Brazilian aviculturists called it Ara mosaica because of the curious mosaic like blue patterning on its otherwise golden yellow plumage. The next time we went we were disappointed to discover that he had exchanged it with Antonio de Dios in the Philippines for a pair of Cinnamon Blue and Yellow Macaws, another mutation of the species with a pale cinnamon sheen to the blue feathers on the wings and back. The photographs I took at the time have appeared over the years in English and German language publications, but I reproduce them below. 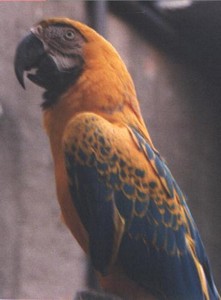