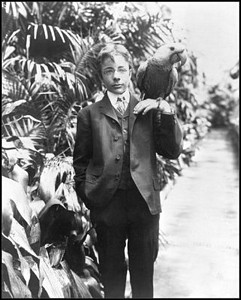 I have been sent this photo of fifteen year old Teddy Roosevelt Jnr in 1902 with a blue macaw by Michael Strobl from Vienna, who asked whether the macaw could possibly be a Glaucous Macaw (Anodorhynchus glaucus). It is in fact a Hyacinthine Macaw, but still an interesting historical picture. Teddy Jnr's father, who was President of the USA at the time the photo was taken, was greatly interested in wildlife and mounted an expedition to Brazil from October 1913 to April 1914.  The expedition spent considerable time in Mato Grosso, which at that time was comprised of today's states of Mato Grosso and Mato Grosso do Sul, and noted about the Hyacinthine Macaw that "at many points on the journey through Matto (sic) Grosso this superbly colored macaw was abundant. They were invariably seen in pairs"