I found an interesting report in the

I received the August issue of Gefiederte Welt, a leading German bird magazine, this morning and found a report on an unintended breeding of a hybrid macaw where the father was a Hyacinthine Macaw and the mother a hybrid produced by a Green-winged Macaw (Ara chloroptera) male and a Blue and Yellow Macaw (Ara ararauna) female. This is known as a Harlequin Macaw in the USA. In addition the Hyacinthine Macaw male was blind. The German 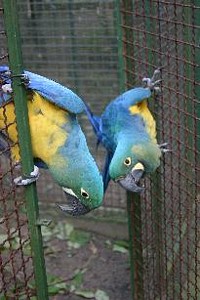 breeder had acquired the male to pair with a Hyacinthine female. It soon became apparent that the male had problems with its sight and this deteriorated until he became blind. Although he was kept in a very large aviary he managed to climb around to find the food and water bowls as well as the nest-box. Eventually the pairing resulted in a clutch of fertile eggs, but these failed to hatch. Then sadly the female died. The breeder did not want the now fully blind male to be put through the stress of breeding so placed a hybrid macaw of undetermined gender with him in the aviary for company. The two macaws got on well together, but the breeder was still very surprised to find the hybrid macaw incubating three eggs in early summer 2007. He then later discovered a well-fed young macaw. There was a glass panel on the back of the nest-box so he was able to watch the macaws with the youngster. The latter was well cared for, but the breeder never saw the female feeding it although the blind father was observed climbing into the nest-box to feed it.  The three macaws now live together in the aviary and the young bird is still occasionally fed by the male Hyacinthine Macaw. 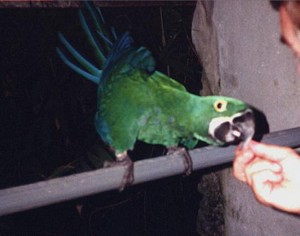 and Yellow Macaw were produced. These also look like Hyacinthine Macaws except they have a yellow breast. The hybrid in the story above looks more like its mother, but has the typical Hyacinthine Macaw eye with its yellow periophthalmic ring.

It should be said that all these hybrids were allegedly unintentionally produced. As most macaw species are endangered it is irresponsible to intentionally breed hybrid macaws and unintentional breeding should be avoided now it is known that it can occur.