I received an e-mail today from Al-Wabra Wildlife Conservation (AWWP) with some wonderful news. They have successfully hatched three more Lear's Macaws, which are now 16, 31 and 34 days old. Here is an image of the 16 day old macaw on its own. 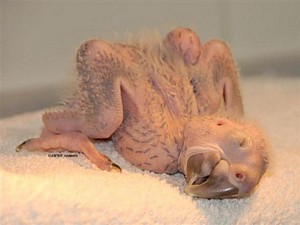 They have made the following statement on the Al-Wabra website.

"The three chicks are being hand-reared by experienced staff after being artificially incubated. Unfortunately the breeding pair which produced the eggs has not yet developed sound incubation skills and several eggs laid were damaged beyond repair before being able to be removed to the relative safety of an incubator. The Lear’s Macaw is rarely bred in captivity and up until last year when AWWP bred their first ever offspring, the species has not officially been bred in 22 years.

The Lear’s Macaws held at AWWP are on breeding loan from the Brazilian Government and are part of an international captive breeding program managed by IBAMA (Brazilian Institute for Natural Resources and Heritage). The birds are managed within a studbook along with other Lear’s Macaws held in Brazil at the Sao Paulo Zoo, Rio Zoo, Crax Foundation and the Lymington Foundation. Outside of Brazil, other Lear’s Macaws in the studbook managed program are held at Harewood Bird Gardens - UK and Loro Parque – Canary Islands. After receiving two pairs of Lear’s Macaws late last year, Loro Parque have also experienced recent breeding success with one chick so far and two more fertile eggs pending.

Congratulations to Ryan Watson and his team at Al-Wabra!