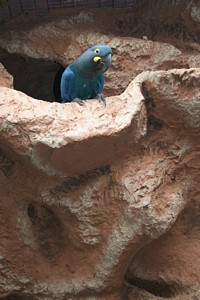 The young Lear's Macaw is now three weeks old and weighs 495 g (hatch weight 20g). Called Edward he is being cared for by an experienced pair of Green-winged Macaws (Ara chloropterus). The Lear's Macaw parents had started exhibiting their readiness to reproduce atthe end of April soon after being housed in the enclosure with the artificial rock-face. Unfortunately they irreparably damaged the first egg they laid and thus the second egg was removed as soon as possible after being laid. Although very slightly damaged it was repaired and placed under the Green-winged macaws, who hatched it and will care for the young macaw until it fledges in seven to eight weeks.  Click here for the full press release from Loro Parque. 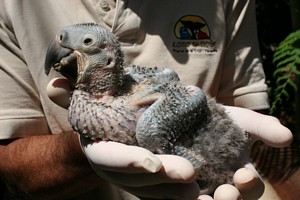