I am very pleased to report that the fertile egg from the re-united Spix's Macaw pair, which I 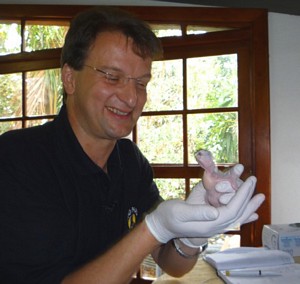 mentioned on 25th February 2010 below, successfully hatched on March 11th. It is now 35 days old and weighs a healthy 258 g. On the right you can see a picture of the chick at 11 days with Matthias Reinschmidt. There are 71 Spix's Macaws in captivity now. Although Birdlife International refers to 120 on its website, this is highly speculative. There were 78 noted in the official studbook, but after no evidence was made available to prove the existence of 12 macaws in Switzerland, which were included, the studbook-keepers decided to remove them from the record. Two have since died and seven hatched, thus making the present verifiable total 71 macaws. 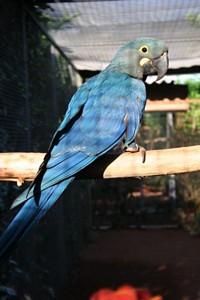 Further to my brief report on 13th April 2010 below the young Spix's Macaw returned from Loro Parque very recently to Brazil will eventually join the breeding group at São Paulo Zoo and the Lear's Macaw (left) will go to the zoo at Belo Horizonte. Below you can see a photo of three young females at Loro Parque. Both Spix's and Lear's macaws can be visited by attendees at the conventions in Tenerife in September and this is included in the list of 33 good reasons produced by Matthias Reinschmidt to travel to Tenerife then. There are at present 17 Lear's Macaws and 8 Spix's Macaws at the Loro Parque breeding centre in Tenerife.