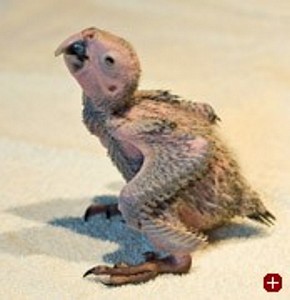 The successful hatching of Frieda, the young Spix's Macaw at ACTP in Germany has been given extensive coverage in the German press, including the Frankfurter Allgemeine, which published a more up-to-date photo of Frieda than the one below. You can see it on the left.

Also while I was in Brazil I heard that the two fledgling Lear's Macaws, which were discovered on the ground by a field biologist at Serra Branca in March 2003 and were held there under guard in a specially constructed large aviary, were finally released a year ago. When I was there in July 2004 they were quite tame even then and climbed down the aviary wire to interact with me. A release some four years later could not have been easy. I am trying to get more information on this.

It also appears that the wild population of Lear's Macaws has increased somewhat. Field workers now believe there are now in excess of 900 macaws. If correct this is excellent news. It also accounts for the quantity of maize being handed out to local subsistence farmers as compensation for damaged corn crops.