Their greatest predator, the Toco Toucan, also contributes considerably to the dispersal of the seeds of their main nesting tree

A recent study conducted in the Pantanal has shown that the greatest predator of Hyacinthine Macaw eggs and young, the Toco Toucan (Ramphastos toco), also contributes considerably to the dispersal of the seeds of the manduvi tree, the main nesting tree of the Hyacinthine Macaw. It is 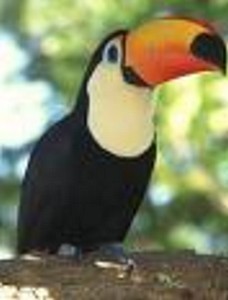 the shortage of these large trees that played a major role in the decrease of the macaw population in recent decades. The macaw population has stabilised and increased in recent years because of the dedicated work of the Projeto Arara Azul team under the leadership of Neiva Guedes. They have prevented unnecessary logging, maintained nesting trees and installed nestboxes, which have taken pressure off the competition among various avian species for suitable nesting cavities.

It is estimated that Hyacinthine Macaws lose nearly a quarter of the eggs laid each year to predators, which include jays, possums and coatis as well as toucans, but the latter take over half. The toucans will also predate macaw nestlings. However on the plus side they disperse widely the seeds of the manduvi. They apparently collect nearly 90% of the seeds, which are dispersed.