Lots of happenings to report!

Some different news and information about the Blue Macaw world 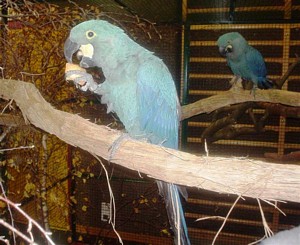 Lots of happenings to report! Earlier this year I heard that two Lear's Macaws were exhibited at a show held last November by the Amicale du Bec Crochu (English - Friends of Hookbills), an aviculturist group in the French speaking part of Switzerland. At first I thought this must be an identification error, but I have discovered they were birds belonging to a member of the club called Constantin Santoli. Mr Santoli apparently also works with the local veterinary authorities as a parrot consultant and as such frequently holds confiscated birds on its behalf. He is 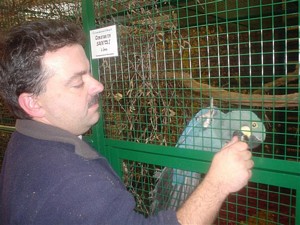 pictured below with the macaws.

Mr Santoli allegedly claims to have legal papers for Lear's Macaws imported in 1980 - although the macaws exhibited at the recent show appear to be juveniles - and is said to believe there are more than 30 illegal Lear's Macaws in Switzerland and more than 15 Spix's Macaws. If this is the case we would strongly urge Mr Santoli to contact IBAMA in Brasilia immediately to allow the Brazilian government agency to track down any illegally held macaws in Switzerland. I understand the Swiss authorities are as usual being very unhelpful. A similar situation arose some years ago 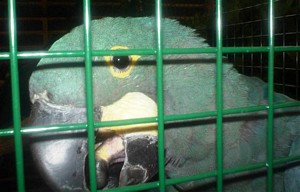 with St. Vincent Amazons, which Mr Santoli is also alleged to hold. It is baffling to all involved in conservation of rare parrot species why the Swiss authorities persist in taking such a cavalier attitude to illegal trafficking going on under their noses, especially as Switzerland is home to the CITES organisation.

It is also reported in the art world that Sheikh Saud Al-Thani, second cousin of the Emir, has been arrested by the authorities in Qatar for alleged misuse of public funds in the acquisition of expensive works of art for the museums of which he is overseeing the construction in Qatar as part of an ambitious plan to transform the tiny Gulf state into a major international cultural centre.  According to the Art Newspaper  this month the Sheikh has recently been transferred from house arrest to prison. An Arabic language newspaper Al Sharq  has reported that some $US 275 million has been spent by the National Council for Culture, Arts and Heritage (NCCAH) of which Sheikh Saud Al-Thani was until recently chairman. However it seems that this astounding situation will not affect the operation of the Al Wabra Wildlife Preservation project in Qatar, where there are four pairs of Lear's Macaws as well as the Spix's Macaws acquired from Antonio de Dios. There are also the macaws held in Switzerland, which the Sheikh acquired from Roland Messer.