My trip in Washington

I have just returned from Washington to see the latest addition to the family. My eldest son, a marine biologist, moved there last November with his family to work for NOAA.  I took the Jack Russell terriers out for a walk after the long flight and heard the cuckoo in the woods. In previous years I have heard it first in early May and last year at the end of May, so this year it appears to be very early. The weather has been very strange recently. Only a couple of weeks ago we had snow and freezing temperatures. Today it was 15 C (59 F) and the hedgerows are full of singing birds. In Washington I experienced very heavy rain and thunder storms before my departure.

Although my trip was for two days only I did manage a brief visit to the specimen collection at the Smithsonian Institution. There I examined the three Glaucous Macaws (Anodorhynchus glaucus) collected by Cptn. Thomas Page during his expedition to Argentina and Paraguay from 1853 to 1856. When researching this now extinct macaw in 1992 I had not been able to find any reference to the Glaucous Macaw in his narrative of the expedition published in 1859 except in the list of perching birds in Appendix J, where it appears as Anodorhynchus cinereus. See footnote in my article in the Parrot Society magazine published in 1992

The date given for the collection of the macaws on the tags attached to the three specimens was 1st August 1854. On examining the text again today I discovered Page was exploring the Riachuelo river, a tributary of the Paraná  just south of the Argentine city of Corrientes, at that time and indeed writes "I was fortunate in obtaining some rare birds........". The specimen marked A.cinereusalso gives the location as Corrientes. It is easy to understand why Page described the macaws as "cinereus" The three specimens at the Smithsonian look very grey on the breast area in certain light - see image below. 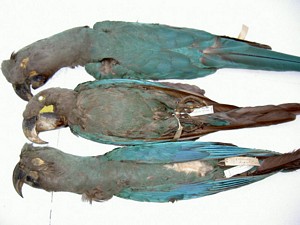