Quite a lot has been happening in these months!

It's a long time since I published any news, but quite a lot has been happening. The Lear's Macaw young hatched earlier this year at both Al-Wabra Wildlife Conservation and Loro 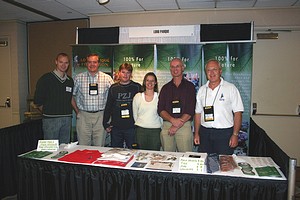 Parque are doing well. I went to the American Federation of Aviculture's three-day annual meeting - this time in Los Angeles - in August. Ryan Watson, the talented young Australian aviculturist from Al-Wabra Wildlife Condervation, gave a presentation each day on various aspects of the important work there and I shall put these up in the next few days. Simon Jensen, who has just moved from Al-Wabra to Walrode Bird Park in Germany was also there as was David Waugh from Loro Parque, so there was excellent opportunity for networking with other "blue macaw " people as well as listening to a wide range of presentations.

I also attended at the beginning of this month the one-day annual meeting of the German Fonds für bedrohte Papageien (Engl: Funds for Endangered Parrots), which was held this year at Leipzig Zoo.  The talks were again excellent and included a presentation from Sven Hammer, the German veterinarian, who has played a major part in setting up the establishment in the middle of the desert at Al-Wabra Wildlife Conservation and continues to lead the team there. There have been some serious disease problems with the Spix's Macaws acquired from the Philippines and Switzerland, which Sven and his team in Qatar have had to contend with.  They are to be commended for their openness in discussing this situation as well as their success in breeding with their livestock.

Incidentally Leipzig is one of those old city centre zoos, which is investing heavily to take it

from the 19th to the 21st century. The primate enclosures are very large and provide the various primates (gorillas, chimpanzees, oran-utans, gibbons and bonobos) living in them an interesting spacious environment.  The elephant compound is also very attractive offering the possibility of seeing elephants swimming underwater through a subterranean glass panel.

We are still working on re-designing the website, which should be finished by the end of the year.