Some good news from Chester Zoo in the UK

Some good news from Chester Zoo in the UK. They have managed to breed a parent-reared young Hyacinthine Macaw. The parents named James Bond from his ring number and Miss Moneypenny, which had come from the USA in 1992,  had hatched a chick previously, but it was hand-reared by the keepers at the zoo. It appears that a change of accommodation and diet has led to breeding success.  The young macaw hatched in May, but has only recently left

the next-box, where it was mainly cared for by the female. Neither the parents or their offspring are on public display.

Last weekend I attended the annual day seminar of the Fonds für bedrohte Papageien (Engl: Funds for Endnagered Parrots)  - a parrot conservation group set up by parrot breeders and keepersin Germany under the auspices of the Munich-based ZGAP - Zoologische Gesellschaft für Arten- und Populationschutz (Engl: Zoological Society for Species and Population Conservation). This year it was held in the Dinosaur Museum located in the extensive grounds of the zoological and botanical gardens in Stuttgart, known as the Wilhelma. I had opportunity to visit the museum with its brilliantly staged dinosaur collection, 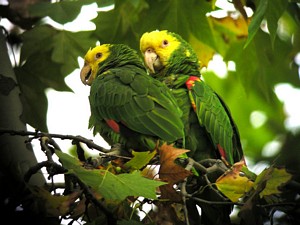 the Natural History Museum and the zoo itself. The Natural History Museum is also based in another small palace in the grounds of the Wilhelma, where there is incidentally a growing breeding feral population of some 50 Amazon parrots, mainly Yellow-headed Amazons (Amazona o. oratrix). There were several species of parrot in the zoo, including Hyacinthine Macaws and Kakas from

New Zealand, which are rarely seen in captivity.

The Natural History Museum was small, but like the Dinosaur Museum, also brilliantly staged. It had a small room dedicated to extinct species, which apart from a dodo skeleton included mounted specimens of a pair of Cape lions, a pair of Passenger Pigeons, a Giant Auk, a Caroline 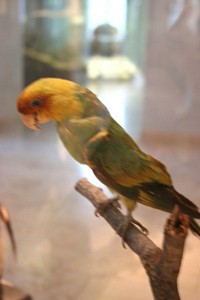 Parakeet and the finest thylacine or Tasmanian Wolf/Tiger I have ever seen. This species, which like the Glaucous Macaw is rumoured still to exist without any real evidence, is generally accepted to have become extinct in 1935 with the demise of the last remaining captive animal in Hobart Zoo, Tasmania. The specimen in Stuttgart, which looks like a

female, was received by the museum there in 1899.

In Germany preparations have begun for this year's Ornithea show, which will be held in the Cologne suburb of Porz-Zündorf from 31st October to 2nd November. This show, which is organised by the local bird breeders' group in the secondary school hall there features birds bred in aviculture in planted aviaries and large exhibition cages with water  features and rock formations.  Lastyear's show had 108 such enclosures with some 500 native and exotic birds from 185 species and sub-species ranging from soft-bills through parrots to owls and small raptors. A list of the birds shown last year can found on the club's website. The birds are displayed in as natural an environment as possible and are not offered for sale.  There is a one-day seminar on the Saturday to which well-known speakers are invited, but these are held in German.

Finally the 2nd Aviary convention will be held at Jurong Bird Park in Singapore in mid-November. Held every four years internationally known speakers talk on a range of topics.