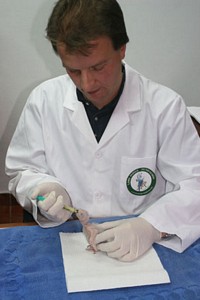 Some more excellent news from Loro Parque. Another Spix's Macaw was hatched successfully on 17th January. The egg was laid on Christmas Day last year completely outside the usual breeding period and was incubated by the adult female until it was established the egg was fertile. It was then removed to an incubator for the remainder of the incubation period. The hatchling weighed 13.5 g. It was then fed every two hours by the team at Loro Parque and now at two weeks weighs just over 70 g  The owner of the Spix's macaws transferred to Germany from Switzerland last year has now signed up to the official recovery programme and will transfer a male to Loro Parque to form a new unrelated pair there. Both this step and the new arrival will make further considerable contributions to the recovery of the species and its eventual rehabilitation in the wild.