over the place. One recent programme produced by National Geographic highlighted the development of birds from dinosaurs and specifically from a small raptosaurus the size of a large pigeon, which looks like a miniature velociraptor. They referred to it as a microraptor (right).  It appears the raptosaurs developed feathers to maintain body temperature as they got smaller and the development for flight only came much later. The link appears obvious with newly hatched parrots such as cockatoos and regular visitors to the website may recall that in my report on Monday, 4th December 2006 I mentioned how reptilian the Spix's Macaw looked with its eye and bare facial skin. You can see the image I used then below. There has also been interesting research recently pointing out the 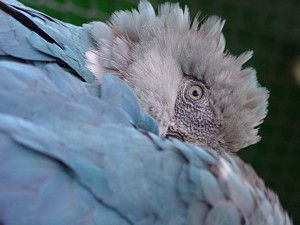 similarity of the genome for producing feathers and that for producing scales. They introduced feather genomes to the legs of a chicken before it hatched and it had feathered legs. They also discussed the possibility of introducing scale producing genomes to an emu egg to see if it hatched with scales. I must confess to feeling uncomfortable with this. More information about Darwin can be found at the BBC website I heard today that a full-sized replica of his cabin on the Beagle is being installed at his former home, Downe House, near Orpington, Kent in the southeast of England.