The American Federation of Aviculture convention

Held in Dallas, it offered a lot of very interesting and informative presentations as well as excellent opportunity to network

I have just returned from attending this year's American Federation of Aviculture (AFA) convention in Dallas. There were a number of very interesting and informative presentations as well as excellent opportunity to network. While there I managed to visit the Dallas Zoo and the Dallas World Aquarium. The latter was particularly interesting, indeed amazing, because it is constructed within an old warehouse in the heart of downtown Dallas. I was shown round by the senior aviculturist, Josef Lindholm III, who gave two presentations at the 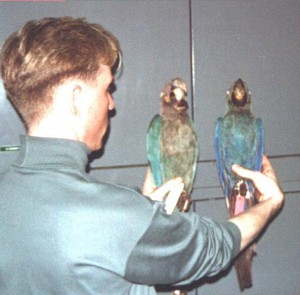 convention on aracaris and cotingas. He had met some of the leading aviculturists of the past, including shortly before his death in 1985, Jean Delacours, who apparently in his early teens saw a Glaucous Macaw (Anodorhynchus glaucus) at the Jardin d'Acclimatation in Paris just over 100 years ago in the opening years of the 20th century. According to Josef he commented "It was quite ugly! - Too large a head, too short a tail, an unattractive colour... Not pretty at all...  But it was the only one I saw in the world!" When I visited the museum at the Jardin D'Acclimatation towards the end of the 1980s I took a photo (on the right) of the Glaucous Macaw specimen there being held alongside that of a Lear's Macaw.

While on the subject of the Glaucous Macaw, Carlos Bianchi, who works closely with IBAMA, the Brazilian government wildlife agency, on both the Lear's Macaw and Spix's Macaw programmes, mentioned in his presentation on the status and conservation of parrots in Brazil that this species had been declared extinct in the Brazilian Red List to be published later this year although the IUCN in their publication last year (2005) persisted in giving it a status of critical. The reason for this appears to be a number of unconfirmed reports of sightings as well as a comment by Fernando Costa Straube in his work on avifauna in the southeast region of the state of Parana [Contribuições ao conhecimento da avifauna da região sudoeste do estado do Paraná (Brasil)] published in 1988. He says that he was informed by local inhabitants that between 1961 and 1964 there were two species of macaw living along the margins of the river Iguaçu. One was red with blue wings, which he took to be the Green-winged Macaw (Ara chloroptera) and the other was more seldom,  smaller, greenish-blue with yellow at the base of its bill. He then puts in brackets the name Anodorhynchus glaucus with a question mark.

This question mark has apparently been converted to recorded sightings by the experts at the IUCN. However, I do not believe these reports justify a belief in the species' continued existence. Two more expeditions have been mounted recently and have found no trace of the species. Reports such as that above are notoriously unreliable. I can remember being told by a rancher in the northern Pantanal eleven years ago that he had seen a small blue macaw in the area. When I showed him illustrations of the four blue macaws he pointed at the Spix's Macaw and insisted that was the bird. "Sky blue" he kept repeating. At the time we thought there was a remote possibility it might have been an escapee from a trafficker on his way to Paraguay - some eight years earlier three Spix's Macaws had been confiscated from a house in Asuncion. However, we soon came to the view that the rancher was just simply mistaken.