I've just got back from San Francisco, where I went to attend this year's American Federation of Aviculture's (AFA) convention. I have been attending this three-day convention for nearly twenty-five years and it's where I got to know Thomas Arndt in 1988, which resulted in our collaboration on the Lexicon of Parrots. There was as usual an excellent programme of presentations. Well-known veterinarian Susan Clubb gave the opening keynote address on the past, present and future of aviculture and the pet bird industry. Of particular interest to blue macaw lovers were the presentations by Matthias Reinschmidt, now Director of Zoological Operations at Loro Parque, who talked about the breeding of rare macaws there, and Scottish-born Ian Tizard from Texas A & M University, who gave an update on research into avian bornavirus, which he and his team identified as the cause of  Proventricular Dilatation Disease (PDD). This is important as many of the captive Spix's Macaws are suffering from this. He also gave a separate interesting presentation on the Scarlet Macaw Genome project 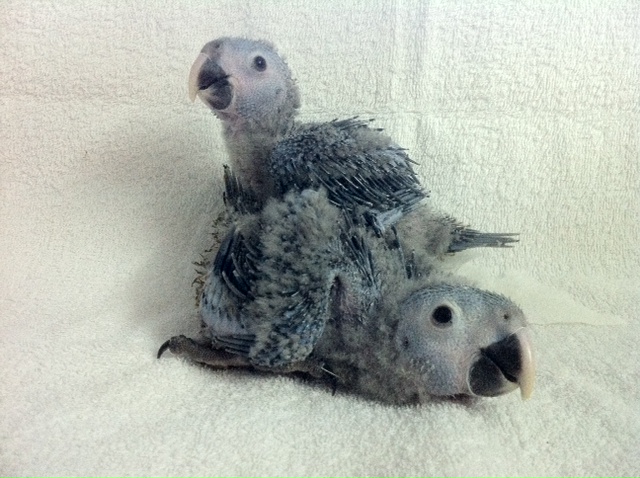 While I was in the USA I received a photo of the two recently hatched Spix's Macaws - see5th July 2011 below - from ACTP in Germany. As the adult pair at ACTP are siblings the male will be sent to Loro Parque and ACTP will receive another adult male., which he is conducting for the Schubot Centre. To date only the chicken, turkey and zebra finch have been completely sequenced among avian species- the research for the first two being sponsored by the poultry industry. They hope to publish the genome sequence of the scarlet macaw in October of this year. It would be great if they could follow this up by sequencing the Glaucous and Lear's Macaws to solve the relationship riddle of the two species. The DNA of the Glaucous could be obtained from the leg of a museum specimen.