The annual convention of the German parrot conservation organisation

I attended the annual convention of the German parrot conservation organisation "Fonds für bedrohte Papageien" (Eng: Funding for Endangered Parrots) at the end of September. This year it was held at Walsrode Bird Park -probably Europe's best known and most interesting bird park, which had faced closure, but fortunately had been rescued earlier in the year by a large company. The one-day programme was varied and interesting. The only presentation on 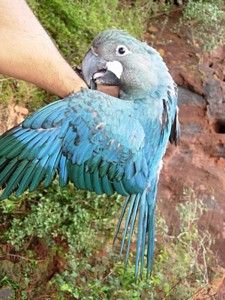 the blue macaws was an excellent illustrated talk by Nicole Ludwig on her experiences at Al-Wabra Wildlife Conservation in Qatar on assisting in the training of Spix's macaws to accept veterinarian examination and treatment. There was also a brief unscheduled report on the situation with the Lear's Macaws at Serra Branca in Bahia, Brazil. It was, however, curiously alleged that the Lear's Macaws did not breed at Raso da Catarina near Canudos because the temperature there was lower than at Serra Branca. This is, however, incorrect as the these photos of eggs, a chick and fledgling clearly show.

I have also just been sent a report published two years ago in a Brazilian specialist ornithological journal suggesting that the Lear's Macaw is a sub-species of the Glaucous Macaw. This report is in Portuguese so I need a little time to translate it to place on this website. 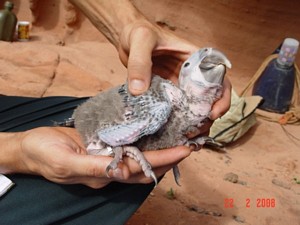