The birth of Frieda 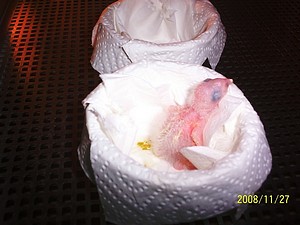 for the Conservation of Threatened Parrots (German: Verein zur Erhaltung bedrohter Papageien) near Berlin had successfully hatched. The hatchling has proven to be female and is called Frieda. One of the other eggs was fertile and hatched with assistance, but sadly that hatchling did not survive. The third egg was said to be infertile. Frieda is the only Spix's Macaw successfully hatched this year worldwide within the international official breeding programme. Any breeding within the group of Swiss aviculturists outside the official programme is, however, at present unknown.

ACTP claims to hold further Spix's Macaws in Switzerland, which produced two young last year, but I have not yet had this confirmed by a reliable independent source.