I attended the Parrots International annual symposium in Coral Gables, Miami, at the beginning of the month. It was held in the Biltmore Hotel, a huge very grand art deco structure built in the mid 1920s. The hotel has very extensive grounds including an enormous golf course, but still with plenty of trees. It also has a feral parrot

population, which includes Blue and Yellow Macaws(Ara ararauna), several species of Amazon parrot such as Lilac-crowned (A. finschi) and Orange-winged (A.amazonica), conures such as Aratinga mitrata and frontata as well as Brotogeris andPionus species. I went out early on the last day with Roelant Jonkers, one of the symposium speakers, and his partner, Grace, who are recognised experts in feral parrot populations worldwide and managed to get some reasonable photographs of the local feral parrots. 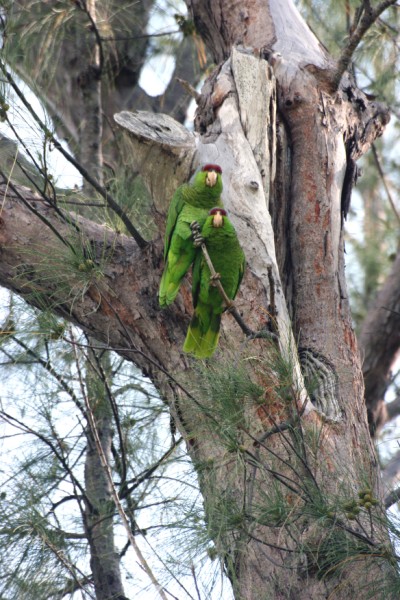 The two-day symposium was very informative and also enjoyable. The speakers included David Waugh from Loro Parque Fundaciόn, who gave the opening keynote presentation on the work of the Fundaciόn and Ryan Watson

from Al-Wabra Wildlife Preservation in Qatar, who gave his usual excellent presentation on breeding the blue macaws there. He also informed us he would be moving to Brazil soon to look after the AWWP operation there. Let's hope this will give much needed impetus to the re-introduction into the wild of the Spix's Macaw. Other Blue Macaws people present, whom I was very pleased to see, were Neiva Guedes from the Projeto Arara Azul, Yara Barros, who now works at Foz do Iguaçú and, of course, Ryan's wife, Monalyssa, who is a blue macaws specialist in her own right.

I arrived two days early, so managed to visit Island Jungle, formerly known as Parrot Jungle, in its location on Watson Island, just off one of the causeways over to Miami Beach from the mainland. I first visited Parrot Jungle in its old location in a Miami suburb more than 25 years ago, but it was my first visit to the "new " location. It occupies some 18 acres ( just over 7 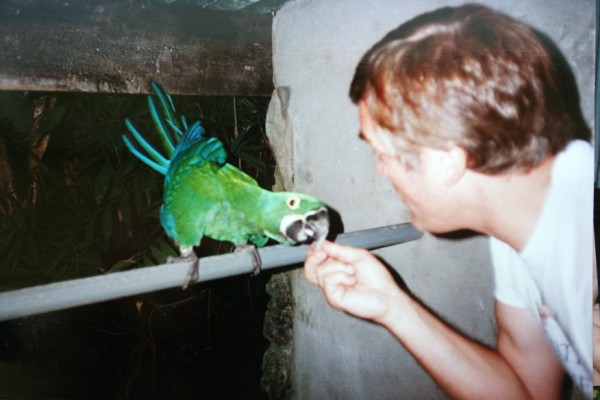 hectares or 70,000 sq. metres) on the island and thus is just slightly larger than the former Parrot Jungle. It still holds a lot of parrots, although there are many hybrids. Parrot Jungle also used to have many hybrids, which included a green Hyacinthine Macaw. Nonetheless I enjoyed my day there wandering around and attending the shows.

Just before I left I visited the shop and bought a book entitled "Miami's Parrot Jungle and Gardens - The Colorful History of an Uncommon Attraction " written by Cory H.Gittner and published eleven years ago in 2000.  I started reading it on the flight back to the UK and found it very readable as well as informative. However it held a big surprise for me. On page 108 I learned that the very first breeding of the Lear's Macaw in captivity was at Parrot Jungle and not Busch Gardens in Tampa as I had always believed.

The author wrote " ...... But breeding did thrust the attraction back into the international spotlight in 1982. In June of that year, the world’s first Lear’s macaw was born in captivity at Parrot Jungle. Lears (sic) are perhaps the rarest of all macaws with less than fifty individual birds living in a protected forest of northern Brazil. In 1952, Parrot Jungle received two male Lears along with a shipment of hyacinths, which they resemble. In 1981, one the males, Jet, 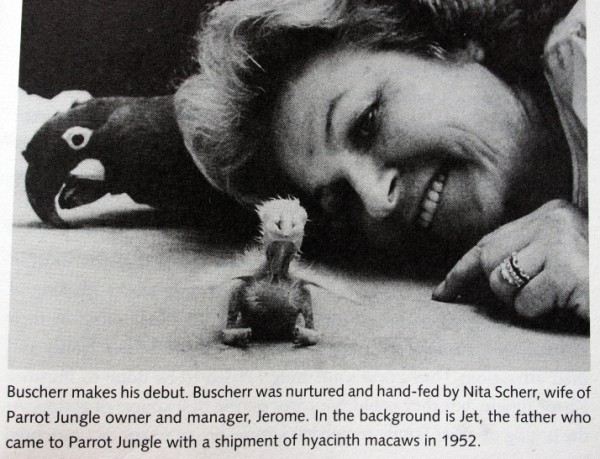 was paired with a female loaned from Busch Gardens in Tampa. The birth of their chick, Buscherr, made headlines around the world. At the time, Jerome’s wife, Nita, had been hand-raising chicks in special cages at their home close to Parrot Jungle. She also specialized in nursing sick birds back to health. She fed Buscherr for three months until he was eating on his own and then packed him off to Busch Gardens.  The next year, two females were
successfully hatched. Unfortunately Buscherr died young from intestinal parasites. By 1990, both the mother and the other Parrot Jungle male were dead of old age. Today, Jet and his two daughters are the only known Lear’s macaws in captivity in the United States. The Lears, along with three other rare macaw species – the Spix, the blue-headed, and the glaucous – almost certainly face extinction. .............." The text was accompanied by a monochrome picture taken from a local newspaper in 1982.

As this information is contrary to published literature I have since spoken to several leading experts, who also believed the first breeding was at Busch Gardens, and am trying to get confirmation from Jungle Island.

Finally I was fortunate enough to get an invitation to visit the private facility operated by the Berlin-based ACTP in Florida and see the St Vincent Amazons (Amazona guildingii) acquired
from Ramon Noegel in the USA some five years ago. The parrots live in large suspended flights, which allow them plenty of movement, and they looked well cared for. I saw no evidence of the obesity problem, this species of Amazon is prone to. They have also hatched a chick successfully very recently there.