The repatriation of two Macaw

Today is election day for the UK. It is a beautiful sunny day, the bluebells are out in the local wood and all the birds are singing in the hedgerows. I doubt  we shall be singing tomorrow. It looks like we shall have a "hung Parliament" - a situation where no political party has gained an overall majority - when we really need at this time clear decisive governance. Coalitions have never really worked in the British political scene except in dire situations such as total war. We are therefore entering new territory.

On 13th April 2010 below I promised to bring more information about the transfer of the young female Spix's Macaw and Lear's Macaw bred at Loro Parque to Brazil. In the press release issued at the end of April Loro Parque states "The 22nd of March was a memorable day, because for the first time two young animals that were bred in the Loro Parque Foundation, returned to their home country Brasil, to be paired with the appropriate partners from the zoos of Sao Paulo and Belo Horizonte. This event occurs within the breeding programmes for the Spix’s Macaw, extinct in the wild and the endangered Lear’s Macaw (Anodorhynchus leari). Thus, the Curator of the LPF, Dr. Matthias Reinschmidt, was accompanied by one of the Ambassadors of the Loro Parque Foundation, the famous German showmaster and presenter, Frank Elstner.

After the birds had arrived safely into the state quarantine of Sao Paulo, Dr. Reinschmidt and Mr. Elstner, accompanied by a German television crew of the SWR which is filming a documentary for the first German television channel (ARD), continued travelling to look for some history and “traces” and at the same time to visit the parrot conservation projects, financed by the LPF.

In the Caatinga they visited the former habitat of the Spix’s Macaw, and the breeding cliffs 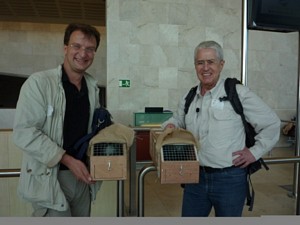 and feeding areas of the Lear’s Macaw. They were able to observe flocks with up to 150 Lear’s Macaw. After that the trip took them to the Pantanal, the largest swamp area of the world, and the retreat of the Hyacinthine Macaw (Anodorhynchus hyacinthinus). Here among the many blue macaws they also many other parrots and birds as well as many mammals and caimans. The 90-minute documentary of the trip will be broadcast at the end of the year on the first German television channel."

The report was accompanied by this photo of Matthias Reinschmidt and Frank Elstner.