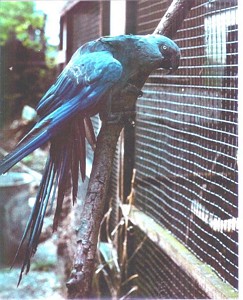 Some more good news. I've heard that in addition to the three Spix's Macaws bred at Al Wabra Wildlife Preservation in Qatar - mentioned below on 29th April 2009 - they successfully hatched two more. Congratulations to Sven, Ryan and the rest of the team.

I have also been sent a photo by Barry Kyme of the Spix's Macaw owned by George Smith in the 1970s.  It was taken by his late father, R.T.Kyme, in 1976. Barry says it shared an aviary with a Yellow-eared Conure and was called Bobby. According to George Smith in a report he wrote in 1990, which was unpublished until I put it on this website last year,  his Spix's Macaw was sent  to Walsrode in 1980 to pair with a Spix's Macaw there. It apparently died in 1989. Horst Müller photographed a pair at Walsrode in 1985. George's macaw must be one of this pair. The other macaw, called Pele, was sent to Brazil in 1990 or 1991, where it died in 1994 or 1995 without reproducing.