The oldest macaw bred this year has now fledged; the other three youngsters are doing well

Just a quick up-date on the situation with the young Lear's Macaws at Loro Parque, Tenerife. The oldest macaw bred this year has now fledged and is pictured below with Isa, one of the 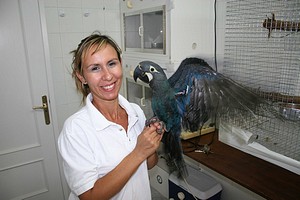 staff at Loro Parque. The other three youngsters, now about four weeks old,  are doing well, one with the parents, one with foster-parents (Green-winged Macaws) and the third being hand-raised by Matthias Reinschmidt in the "Baby station". The latter two youngsters were from eggs laid by the second adult pair of Lear's macaws. Since acquiring the two adult pairs in October 2006 from Sao Paulo Zoo under the international breeding programme, seven youngsters have been bred - three last year and four this year.

The procedure with the young macaw being raised by its parents has been interesting to say the least. As the adult pair kept damaging the eggs they produced, the eggs were taken and placed under foster parents if viable. One of these was replaced in the Lear's Macaw nest-box with an infertile egg from a Blue and Yellow Macaw pair (A. ararauna) . After the Lear's Macaw placed with the Green-winged Macaws (A.chloropterus) hatched, a young Blue-throated macaw hatchling (Ara glaucogularis) of the same weight  was put in the egg casing, which was then  deposited under the Lear's Macaw parents immediately after removing the infertile Blue and Yellow Macaw egg. Four days later as the Blue-throated Macaw hatchling reached 55 grams it was removed and replaced with the Lear's Macaw hatchling. Thus the young macaw was returned to its biological parents after they had demonstrated that they could at least feed and raise any young.