Europe and unfortunately I have had no opportunity to post news to the website. However, the past six weeks have also been busy and exciting as well for blue macaw conservation. So there is some catching up to do.

FIRSTLY the Lear's Macaws sent to Loro Parque reported below on 4th December 2006 are doing well and are now housed in an enclosure with an artificial cliff face. Hopefully this will encourage them to breed.

SECONDLY at the meeting of the Committee for the Conservation of the Spix's Macaw held last October in São Paulo Zoo, Ryan Watson, the studbook-keeper, recommended that a 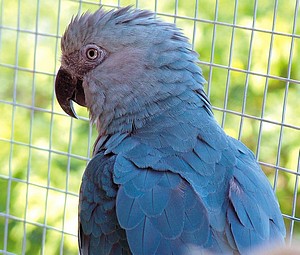 proven male held in Germany should be transferred to Brazil to pair with an egg-laying female there. The German entrepreneur, Martin Guth, who had acquired a number of Spix's Macaws from Switzerland with the permission of the German CITES authorities, had set up the Verein zur Erhaltung bedrohter Papageien (Engl: Association for the Conservation of Threatened Parrots - ACTP) and transferred ownership of the Spix's macaws to it.  The female in Brazil had laid 13 infertile eggs in the past year and the male in Germany had been successful in a pairing with his sibling. As this was not to be recommended for genetic management purposes, it was decided to split the sibling pair, send the male to Brazil and pair the female in Germany with a proven male from Loro Parque. Another male will be sent this Spring to Loro Parque from ACTP in Germany to replace the male already transferred from there to Germany.

The transfer to Brazil was meticulously organised. The male was firstly separated from the female six weeks before the planned departure date and underwent a thorough examination by the well-known German veterinarian Marcellus Bürkle. The macaw remained in quarantine

until the results came through, which revealed no reason for not transferring the macaw to Brazil.  This transfer required export and import documentation as well as a special permit from the Brazilian Ministry of Agriculture because of strict avian influenza regulations.  By the beginning of February everything was in place and Martin Guth travelled with the macaw via Madrid to São Paulo. After a further four-week quarantine period he was introduced to his new partner in a breeding station belonging to IBAMA, the Brazilian wildlife authority, and hopefully there will be a successful result to report on later this year. There is no doubt that the appearance of Martin Guth on the scene and his acquisitions from the recalcitrant Swiss breeders has dramatically transformed the situation with the conservation of the Spix's Macaw for the better.

THIRDLY Martin Guth has joined with Bill and Linda Wittkoff of the Lymington Foundation in Brazil and Mark and Marie Stafford of Parrots International based in Los Angeles to buy 400 hectares (1,000 acres) of land near Curaça in Bahia. This was where Spix's Macaws last occurred in the wild and where the nest of the mixed Spix/Illigers Macaw pair was located. According to information released by Parrots International the purchase went through on 14th February 2007. The group wishes to restore the habitat and construct a permanent field station so that the future re-introduction of the species to the wild can be assured.

FOURTHLY another land purchase is going ahead in Bahia, this time for the Lear's Macaw near Canudos. The American Bird Conservancy is teaming up with the Disney Wildlife Conservation Fund and the Brazilian conservation group Fundação Biodiversitas to purchase more than 1,200 hectares (3,000 acres) of vital habitat to protect the Lear's Macaw. According to information recently released by the American Bird Conservancy the project will protect key nesting sites, ensure their protection through hiring of forest guards and support education efforts in local communities. The Lear's Macaw and the protection of its habitat are priorities for the Alliance for Zero Extinction (AZE), a global initiative, that aims to protect critically endangered species  depending on single sites for their survival. Fundação Biodiversitas has operated a research station near Canudos for many years - I stayed there in 1997 and 1998  - and the land purchase will expand the area under its control.

FINALLY a warning alert against rogue traders on the Internet. In Europe we are familiar with self-styled breeders from West Africa offering rare and endangered species for sale on the Internet, but these advertisements are widely recognised as typical scams from that region. I have been recently informed that a similar scam is being operated by a fraudulent breeder from the Cameroons on the Mercado Libre website in South America. Whatever your interest, do not waste your time with these people.