Updated information after a long time...

More than three months has passed since I last reported, but much has happened. The weather here in southern England has been very wet and blustery in the last week, apparently so much so that we had no power for twelve hours yesterday. When we rang the power company, EDF Energy, we were told by an automated female voice that it was aware of the problem and there was no point in putting us through to a real person as he or she would not 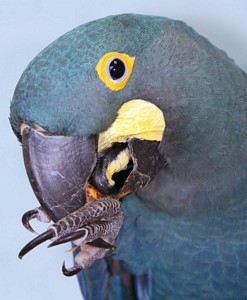 be able to tell us any more. It is astonishing that in 21st century Britain and situated only 60 miles (100 kms) from its capital, London, one should be deprived of essential electrical power for such a long period because of typical seasonal and therefore surely to be expected wet, windy weather conditions.

However, now some good news. Firstly four  young Lear's macaws - two male and two female - have been transferred from São Paulo Zoo to Loro Parque. This occurred at the beginning of November. They are still in quarantine, but will soon be transferred to the breeding centre at La Vera, where they will be paired and hopefully there will be similar success as that reported below on 21st August at Al-Wabra Wildlife Preservation in Qatar. I have been sent the photo on the left of one of the macaws. Also David Waugh and Matthias Reinschmidt of the Loro Parque Fundación have published a paper entitled " News on the captive management of the Lear’s Macaw", which can be accessed by clicking here.

Secondly the Hyacinthine Macaw is one of the subjects of  Extinct, an exciting new television programme in the UK to promote support and funding among the viewing public for conservation projects under the auspicies of WWF . It will be broadcast as a prime time show running from Saturday 9th to Saturday 16th December and features eight endangered species around the world that are threatened with extinction within the next century through habitat loss, poaching and climate change. The animals highlighted in the programme are the Bengal tiger, mountain gorilla, giant panda, Asian elephant, polar bear, orang-utan, leatherback turtle and the hyacinthine macaw.

The Hyacinthine Macaw Project (Projeto Arara Azul) in the Pantanal directed by Neiva Guedes has been chosen and support for the project will be advocated by a celebrity, in this case Michael Portillo, the erstwhile senior Conservative politician, who forsook political life and high office to become a television presenter after his bid to become leader of the Conservative Party failed in 2001. He will visit the project to learn about the threats these creatures face and the solutions WWF and its partners are working on to ensure their survival. He will return to the television studio to make the case for supporting the project before an invited audience and the viewing public. Even if you are unable to view the programme you can still make a much-needed donation by visiting this website.

Thirdly when attending the 6th International Parrot Convention organised by Loro Parque Fundación in Tenerife in the Canary Islands at the end of September I met Linda and Bill Wittkoff, who have set up the Fundacão Lymington near São Paulo. Presley, the Spix's Macaw, who was kept as a pet in the USA for some 30 years, before being repatriated to Brazil four years ago, was given into their care and after one year has undergone an amazing transformation. He is now kept together with a female and may soon produce offspring. Both Linda and Bill deserve congratulating for their unstinting care of this macaw. These two photos below show Presley in two different time: the first in September 2005, the second in July of this year. 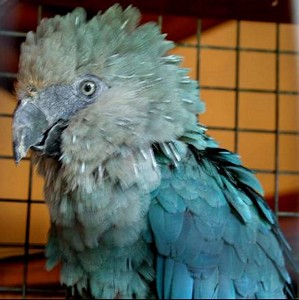 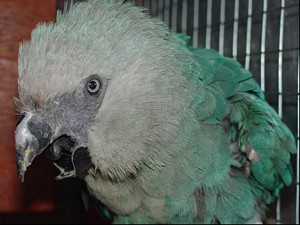 While on the subject of Spix's Macaws I was reminded when studying the bare facial patch and feather structure of the Spix's Macaw  of the bambiraptor at the Discovery Building in Silver Spring, a suburb of Washington DC. Some have believed the Spix's macaw to be a relict species and probably nearing the end of its allotted period. This picture shows clearly how reptilian birds can look. 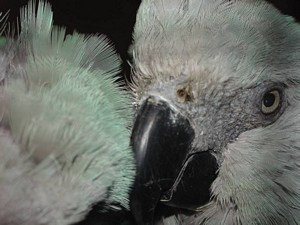 The 6th International Parrot Convention in Tenerife was a great success with an excellent programme of presentations from experts from around the globe. It also afforded great opportunity to network and exchange views and opinions. I have attended all the conventions from the first in 1986 and the topics presented and discussed have greatly altered over the two decades with conservation really at the forefront. This is undoubtedly due to the dramatic increase in conservation projects in all the countries where parrots are endemic and the efforts of organisations like the Loro Parque Fundación, which to date has contributed well over $ US 4 Million to parrot conservation projects. I am already looking forward to the next one in 2010.